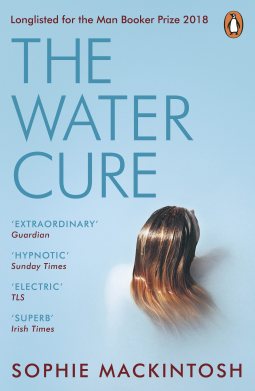 It's rare that a book comes around I hear as much about as I have with The Water Cure. First I saw random mentions of it here or there, then the reviews came steaming in, and then the countless of lists that ranked it as a top feminist novel, a top 21st century novel, as the next The Handmaid's Tale or the next The Power. Even though I'm in Shanghai, English bookstores are rare, so you can imagine my joy when Ellie from Penguin Books UK emailed me abut the opportunity to finally read it myself! Thanks to Penguin Books UK and NetGalley for providing me with a  copy of this book in exchange for an honest review.

Grace, Lia and Sky live in an abandoned hotel, on a sun-bleached island, beside a poisoned sea. Their parents raised them there to keep them safe, to make them good. The world beyond the water is contaminated and men are the contamination. But one day three strangers wash ashore - men who stare at the sisters hungrily, helplessly. Men who bring trouble.

'Visceral, hypnotic . . . with one of my favourite endings I've read in a long while' The Pool

'An unsettling dark fantasy... [It] lingers long after the final page' Daily Telegraph

'Otherworldly, brutal and poetic: a feminist fable set by the sea, a female Lord of the Flies. It felt like a book I'd been waiting to read for a long time' Emma Jane Unsworth

The Water Cure is many things. One thing it is, is a meditation on love. What kind of love we accept, what kind of love we give, how it hurts and how it soothes. In The Water Cure Mackintosh shows us three sisters, Grace, Lia and Sky, growing up on an isolated island with their father and mother. From the beginning something is off as the reader realizes that the oldest daughter, Grace, is pregnant and that there can only be one father. The father, named King, is both the sisters' saviour and their abuser. Their mother, left nameless throughout the novel, is both complicit in their abuse and a victim herself. The sisters cling to each other and despise each other, with a desperation that occasionally becomes violent. From the start The Water Cure subverts what you expect of a dystopian novel. Usually some effort is made by the author to establish the reality of their world, but everything about Mackintosh's world remains vague. Who is this family, why are they on this island, where is this island? It is precisely this vagueness that gives the novel its eerie tone, while also allowing it to seem almost myth-like.

As the book progresses it becomes clearer that the older two sisters, Grace and Lia, are beginning to see the cracks in the story they have been wrapped in since infancy. So what is real and what isn't? Are the three sisters reliable narrators? Hardly, because they have been raised outside reality. They are to be the shining new woman, as King puts it, yet he has raised them to be malnourished and suspicious, hellbent on survival and utterly dependent. Most of the book's narration is done by Lia, the middle sister, who most often finds herself without a 'loved most'. One of the family's "therapies" is to draw irons, small tokens, that decide which in the family will be the focus of the love of another. Lia is often left without, leading to her being deprived of the comfort and validation that comes from knowing you're loved and valued. When men appear on the island after the disappearance of King, it is Lia whose desperation for touch and affection and acknowledgement triggers much of the end portion of the novel. The gentle precision with which Mackintosh analyses Lia's desperation for affection is heartbreaking. She wants to be seen, recognized, touched, but most important to have her existence affirmed.

One thing that touched me very deeply about The Water Cure were the different "therapies" enforced on the sisters by their parents. One I've mentioned above is the drawing of the irons to decide who you can love. Another that is brought up repeatedly shows mainly Lia being forced to harm animals or one of her sisters, thereby sparing her sisters from doing the same She is taught to show her love by hurting them, and in the privacy of her room she hurts herself equally out of remorse. Lia is fascinated by how the washed up men inhabit their own bodies, as if they've never had to be ashamed of it, had to purify it or punished it. That sense of freedom in your own body, the naturalness of it, is something most women will feel is missing from their own lives. It is just one example of how The Water Cure manages to, despite its extraordinary story, describe the ordinary desperation many women feel.

Shortly after reading The Water Cure I also read Sophie Mackintosh's short story Grace. In both we encounter female narrators who are in the midst of something extraordinary, who have to make big decisions about their lives while maybe not having all the tools to do so. Mackintosh's writing is very precise and yet lush. You can picture the life these women live and yet a dreamlike quality remains. When it comes to describing their inner emotional lives, however, Mackintosh is almost clinically sharp. There is no hiding from how torn up these women are. The Water Cure isn't as plot driven as other "feminist dystopias" such as, for example, The Handmaid's Tale. At times the novel feels more like a meditation on rather than a road map to love and liberation. It took me a very long time to figure out how to put my thoughts about this novel  into writing and even now I'm not quite sure I've achieved my goal. I'll be thinking about The Water Cure for a long time, however.

The Water Cure reached 'hit' status incredibly quickly, which means I went into the novel with very high expectations. I found myself grasped by Mackintosh's insights and writing and look forward to her future writings with eagerness.
Posted by Juli Rahel at 9/10/2019 02:24:00 pm