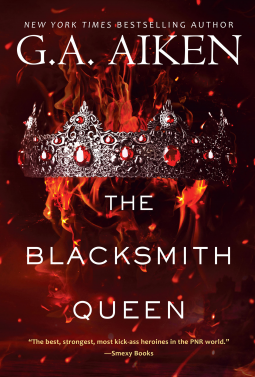 So there I was, expecting the usual (and great) YA fantasy novel about a young girl who is to become queen, maybe with a handsome prince and an epic battle and definitely with some magic. Boy was I wrong. And I couldn't be happier about it. The Blacksmith Queen consistently surprised me and had me in stitches. Thanks to Kensington Books and NetGalley for providing me with a copy of this book in exchange for an honest review.


When a prophesy brings war to the Land of the Black Hills, Keeley Smythe must join forces with a clan of mountain warriors who are really centaurs in a thrilling new fantasy romance series from New York Times bestselling author G.A. Aiken.  The Old King Is Dead With the demise of the Old King, there’s a prophesy that a queen will ascend to the throne of the Black Hills. Bad news for the king’s sons, who are prepared to defend their birthright against all comers. But for blacksmith Keeley Smythe, war is great for business. Until it looks like the chosen queen will be Beatrix, her younger sister. Now it’s all Keeley can do to protect her family from the enraged royals.  Luckily, Keeley doesn’t have to fight alone. Because thundering to her aid comes a clan of kilt-wearing mountain warriors called the Amichai. Not the most socially adept group, but soldiers have never bothered Keeley, and rough, gruff Caid, actually seems to respect her. A good thing because the fierce warrior will be by her side for a much longer ride than any prophesy ever envisioned …

Where to start with this one? As said above, I went into The Blacksmith Queen expecting a rather traditional Fantasy in the sense that it would take itself quite seriously, perhaps. And yet I found a book of riotously fun read. The setup of The Blacksmith Queen is rather traditional. The King is dead! Long live the King! Only question is... who is the new king to be? The Old King had many sons, most of whom die in the first chapter. Yet for once the sons are useless, since the Witches have prophesied that a Queen shall come to the throne. And so begins a wild goose chase for the queen which drags Keeley and her family into a whirlwind of experiences. The Blacksmith Queen feels partly like a roadtrip novel, in the way that The Hobbit does as well. A group of people are thrown together by fate and now have a common goal. The Blacksmith Queen just updates this formula to be a lot more modern.

Keeley is undeniably the main character and she is brilliant. She is a blacksmith, incredibly strong and utterly devoted to her family. She is everything a main character should be and Aiken manages to make her feel real. Her confidence in her own skill is elemental to her character and it was something I found very inspiring. Many Fantasy novels start out with the main character doubting their skills, their position, and those around them. Keeley has an unwavering faith in both herself and her companions. She also has a love for nature's creatures and society's outsiders. Alongside her are her sisters and cousin, as well as warriors she all but adopts into her family. I loved reading about the family dynamics in The Blacksmith Queen, especially between Keeley and her sisters and cousin. There was something very true in their relationships, which veers wildly between utter devotion and utter outrage. Each of these women also has a strong faith in their strengths and themselves, which really shouldn't be as heart-warming and inspiring as it was. Keeley and her friends make for a very mixed fellowship that is full of interesting female characters, fascinating landscapes and innovative twists on familiar tropes.

I had never read anything by G.A. Aiken before, which means I was utterly unprepared for the fun I was in for. The Blacksmith Queen is a very modern Fantasy novel, with the dialogue the best example of it. It is fun and lighthearted, it feels natural and it brings the reader all the closer to Aiken's characters. However, this frankness also allows for more serious matters to be discussed in an open and honest way. At the heart of Aiken's novel is friendship and understanding for others, no matter how cliche it might sound. Aiken's story rests on the shoulders of her characters, but it also indulges in some lovely world-building. We visit a whole variety of beings in The Blacksmith Queen and each gets their own distinct flavor. At times the world-building kind of halts the plot, yet I felt that it added to the atmosphere. I can't wait for the next Scarred Earth Saga novel to bring me back to these characters.

I give this novel..

The Blacksmith Queen is a funny and heartwarming read, full of fascinating characters and hilarious moments. I found myself utterly distracted by this novel and laughing out loud in public. I'd recommend this to anyone looking for a fun and modern Fantasy read.
Labels: Fantasy Female Authors G.A. Aiken Kensington Books netGalley The Blacksmith Queen The Scarred Earth Saga