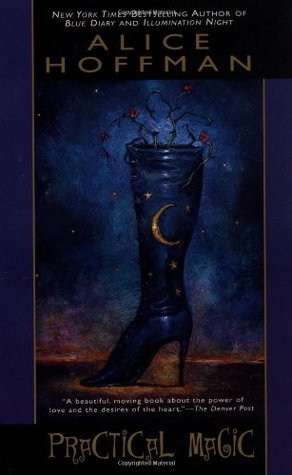 I've decided I'm in a mighty need of reading the book upon which my favourite witchy film is based. By that I of course mean Practical Magic!! Alice Hoffman is one of my favourite authors and I absolutely love this film. But I've never read it so I'm going to have to rectify that now.


The bestselling author of Second Nature, Illumination Night andTurtle Moon now offers her most fascinating and tantalizingly accomplished novel yet -- a winning tale that amply confirms Alice Hoffman's reputation not only as a genius of the vivid scene and unforgettable character but as one of America's most captivating storytellers.

When the beautiful and precocious sisters Sally and Gillian Owens are orphaned at a young age, they are taken to a small Massachusetts town to be raised by their eccentric aunts, who happen to dwell in the darkest, eeriest house in town. As they become more aware of their aunts' mysterious and sometimes frightening powers -- and as their own powers begin to surface -- the sisters grow determined to escape their strange upbringing by blending into "normal" society.

But both find that they cannot elude their magic-filled past. And when trouble strikes -- in the form of a menacing backyard ghost -- the sisters must not only reunite three generations of Owens women but embrace their magic as a gift -- and their key to a future of love and passion. Funny, haunting, and shamelessly romantic, Practical Magic is bewitching entertainment -- Alice Hoffman at her spectacular best.


Tuesday Intros and Teaser Tuesdays are hosted by Diane over at Bibliophile by the Sea and MizB over at A Daily Rhythm.

'For more than two hundred years, the Owens women have been blamed for everything that has gone wrong in town. If a damp spring arrived, if cows in the pasture gave milk that was runny with blood, if a colt died of colic or a baby was born with a red birthmark stamped onto his cheek, everyone believed that fate must have been twisted, at least a little, by those women over on Magnolia Street. It didn't matter what the problem was - lightning, or locusts, or a death by drowning. It didn't matter if the situation could be explained by logic, or science, or plain bad luck. As soon as there was a hint of trouble or the slightest misfortune, people began pointing their fingers and placing blame. Before long they'd convinced themselves that it wasn't safe to walk past the Owens house after dark, and only the most foolish neighbours would dare to peer over the black wrought-iron fence that circled the yard like a snake.' p.1

The Practical Magic film is such a favourite of mine and the way that this opening is shown there is amazing. But I love it in the book.


'After she found several pairs of handcuffs in Ben's closet - which he often uses in his magical act - ice cubes weren't enough.' p.210

Wait, what?! I can't wait to get to this point because who uses handcuffs in magical acts? This sounds like it could be in 50 Shades although if Alice Hoffman had written 50 Shades it would probably be a masterpiece.