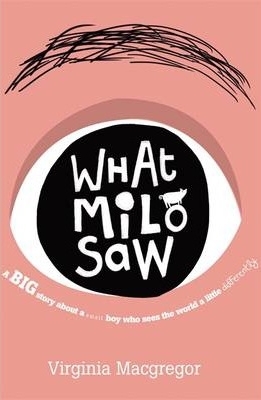 Sometimes it's hard to pinpoint exactly why a novel draws you in, what it is that makes you decide to pick it up and dedicate to it. This is the case for me with What Milo Saw. It's not a read I'd normally gravitate to but after finishing it I'm really glad I did take the plunge with it. Thanks to Little, Brown, Sphere and Netgalley for providing me with a copy of the book in exchange for an honest review.


Nine-year-old Milo suffers from Retinitis Pigmentosa: his eyes are slowly failing, and he will eventually go blind. But for now, he sees the world through a pin hole and notices things other people don't.

When Milo's beloved 92-year-old gran succumbs to dementia and moves into a nursing home, Milo begins to notice things amiss at the home. The grown-ups won't listen when he tries to tell them something's wrong so with just Tripi, the nursing home's cook, and Hamlet, his pet pig, to help, Milo sets out on a mission to expose the nursing home and the sinister Nurse Thornhill.

A great word to describe the first impression of this novel is the word 'lovely'. For some this word falls a bit flat, but I think it is a perfect descriptor sometimes. What Milo Saw is a beautiful book which takes its time to tell an adorable story with a wide cast of characters. However, below the surface there is a lot more going on than the narration betrays. Whether it's ageing, getting divorced or the pressures of everyday life, What Milo Saw picks up on a whole range of topics which can hit really close to home. Macgregor manages to have these themes run through her novel very subtly, each of them serving the novel's main narrative while also getting space of their own. Each of the characters is used by Macgregor to explore one of these by shifting narrator between chapters and it works surprisingly well. The only potential down point is that the ending of the novel felt almost too quick, as if the whole narrative was tied together too neatly. But then all the story lines did get their own endings, each in their own way.

What Macgregor does beautifully is write from the perspective of a nine-year old. Children are always difficult narrators because they either have to be made too wise to allow for a narrative to actually fully develop or are dumbed down so much that they're not even recognizable as children. In some ways Macgregor's novel follows in the footsteps of What Maise Knew, both title-wise and in her characterization of Milo. Henry James' heroine from the title sees too much and hears too much but interprets it all in her own way. In much the same way Milo is a conduit through which the reader experiences much of the novel's story. However, Macgregor infuses Milo with a kind of childish innocence that is missing in James' novel which makes the reader rather attached to her main character. Even when a different narrator is speaking Milo is almost always at the centre of things. Macgregor also describes his condition, Retinitis Pigmentosa, very well. Although it is a disadvantage, as also portrayed as such, it doesn't hinder Milo or hold him back.

Aside from everything else What Milo Saw is incredibly topical. One of the main characters, Tripi, is a Syrian refugee who fled his home-country with his little sister when the bombs started falling and their parents disappeared. Rather than exploit Tripi's story for sympathy or "representation", Macgregor actually works with it and makes it part of the whole story of the novel. As the UK battles with itself over taking in more refugees it's gratifying to see a contemporary novel make the presence of refugees and immigrants a natural part of the English environment. Tripi is crucial to the development of What Milo Saw and he is one of the kindest and empathic characters in the whole novel. This kind of representation is what matters and it can only be hoped that it will set a precedent.

I really enjoyed reading What Milo Saw and couldn't wait to get back to it every time I had to put it down. Milo is a main character you can really get attached to and the rest of the characters are all written in a very emotional but recognizable way.
Labels: 4 Universes Children Disability Divorce narrative Henry James Little Brown Book Group netGalley Review Sphere Virginia Macgregor What Maisie Knew What Milo Saw