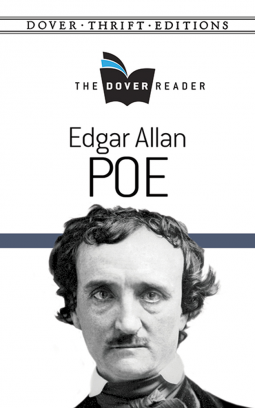 This week I'm using an anthology that I just reviewed today. I mean, who doesn't want to read Edgar Allan Poe all day? Have a look at the Dover Reader below!


The father of the detective novel and an innovator in American Gothic fiction, Edgar Allan Poe (1809–1849) made his living as America's first great literary critic. Today he is best remembered for his short stories and poems, haunting works of horror and mystery that remain popular around the world.

This anthology presents Poe's finest works in a rich selection of poetry and prose that features his only complete novel, The Narrative of Arthur Gordon Pym. Short stories include "The Fall of the House of Usher," "The Murders in the Rue Morgue," "The Pit and the Pendulum," "The Purloined Letter," "The Tell-Tale Heart," and more than a dozen others. In addition to a few selections of Poe's nonfiction writing, the compilation offers "The Conqueror Worm," "Annabel Lee," "The Raven," and many other memorable poems.

Tuesday Intros and Teaser Tuesday are hosted by Diane over at Bibliophile by the Sea and MizB over at A Daily Rhythm.


'Of my country and of my family I have little to say. Ill usage and length of years have driven me from the one, and estranged me from the other. Hereditary wealth afforded me an education of no common order, and a contemplative turn of mind enabled me to methodise the stores which early study very diligently garnered up.' 1% (from 'MS. Found in a Bottle')

I always feel like with Poe's short stories you have to get into it initially. So this beginning doesn't really do anything for me so far, but I tend to always fall in love with Poe's stories halfway through!

'My father made no direct opposition; but my mother went into hysterics at the bare mention of the design; and, more than all, my grandfather, from whom I expected much, vowed to cut me off with a shilling if I should ever broach the subject to him again.' 48% (from 'The Narrative of Arthur Gordon Pym')

I am really curious what has triggered such a response in the family, especially since there are such different responses. I especially love the fact that the Grandfather seems to have almost the strongest objection. This just painted a really fun image in my head so I thought I'd share it.

So, what are you sharing today? And do you like Poe? Got a favourite short story?
Labels: Anthology Dover Publications Edgar Allan Poe Gothic Macabre Poetry Short Stories Teaser Tuesday The Dover Reader Tuesday Intros