Friday Friyay: 'Dictionary of the Khazars' by Milorad Pavić 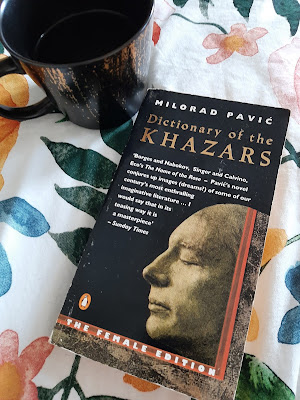 Happy Friday everyone! What a week! It's November, how is that possible? I'm mildly drowning in deadlines but thankfully I'm enjoying all the assignments so I should survive mostly in one piece. I've hardly gotten any reading done lately, but I'm hoping to get into the book below this weekend! I first saw it recommended on Twitter and then when I ran into a copy at a secondhand bookstore I couldn't resist. The photo on the left is my own, since I can't find a proper photo of my cover ANYWHERE....

A national bestseller, Dictionary of the Khazars was cited by The New York Times Book Review as one of the best books of the year. Written in two versions, male and female (both available in Vintage International), which are identical save for seventeen crucial lines, Dictionary is the imaginary book of knowledge of the Khazars, a people who flourished somewhere beyond Transylvania between the seventh and ninth centuries.

Eschewing conventional narrative and plot, this lexicon novel combines the dictionaries of the world's three major religions with entries that leap between past and future, featuring three unruly wise men, a book printed in poison ink, suicide by mirrors, a chimerical princess, a sect of priests who can infiltrate one's dreams, romances between the living and the dead, and much more.

So yes, I have a female edition and I am very intrigued whether I'll find a male edition soon and spot the difference between them. Apparently it is only a paragraph, but apparently it also changes the entire book? I love books that play with their readers!

'Preliminary Notes to the Second, Reconstructed and Revised, Edition
The author assures the reader that he will not have to die if he reads this book, as did the used of the 1691 edition, when The Khazar Dictionary still had its first scribe.' p.1

I love a book that begins with a faux introduction, with warnings, with an attempt to undermine the reader's surety that this is all fiction. I can't wait to dig into these off layers of meta-stories, history, and most likely some serious jokes.

'Rushing onto the battlefield behind him came a pale young man with a half-gray mustache, as though only half the man had ages.' p.56

I have no idea what's going on, except a battle, but I did like the image of a man with half a gray mustache. I'm curious to find out what exactly is going on here, although I have a suspicion I may not actually find out.

What is your least favourite social media app and why? 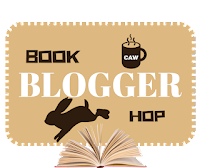 Great question. It has been solidly Facebook for years. The only reason I still have a Facebook account is because I've moved a lot and its the easiest way to stay in touch with friends and to get reminders for their birthdays. But the layout is so old, the algorithm so messed up, the security on it so lax, the oversight shoddy. So yeah, FB is not for me.

I'm one of those people who is still on Tumblr, the only social media where your account is not linked to your identity, where ads are ineffective, and where your follower count is irrelevant. It's honestly a joy to see how badly it technically works but how well that works for the user experience.

So that's me! Who knows if Dictionary of the Khazars will be in any way enlightening but I can't wait to see what you're all reading!