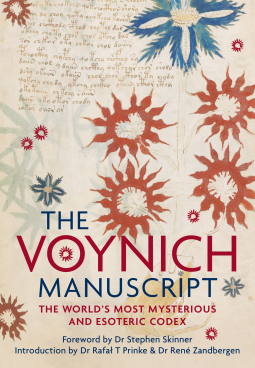 I spent the last four years of my life studying medieval English literature so naturally I have a rather unhealthy appetite for and obsession with medieval manuscripts. Usually I tend to keep my eye out for books on Anglo-Saxon manuscripts specifically, but a few years ago I first read about The Voynich Manuscript and the utter mystery it still is, and how was I supposed to resist that? So when I saw Watkins Publishing had a new edition coming out I was thrilled. Thanks to Watkins Publishing and Netgalley for providing me with a copy of this book in exchange for an honest review.


The Voynich Manuscriptis an extensively illustrated codex featuring cosmological and astrological diagrams interwoven with detailed herbal illustration, relating both to the magical and alchemic view of the universe. It is written in a strangely beautiful cryptographic script.

During my Masters in St. Andrews I did a module called 'Reading the Mediaeval Text' which was all about how to care for manuscripts and how to examine their provenance and contents. I loved being able to dig into the past of the manuscripts shown to us, to trace the history of ownership or attempt to decipher the writing. Let me tell you, that last thing was part of our exams and all of us in the course groaned under the task. So if Middle English proved so much of a challenge to us, how does one attempt to decipher a manuscript written in code? The Voynich MS was named after the antiquarian Wilfrid Voynich, who first brought the book to the attention of the wider world in 1912. The anonymous author of the MS used cryptography, making their writing a continuous riddle which many academics have wanted to solve. There have been suggestions as to the author, including Leonardo da Vinci, but none have proved likely so far, although the author was most likely a physician. 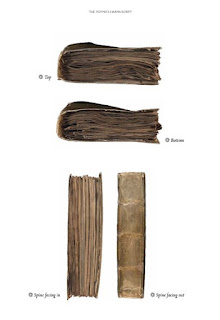 The Voynich Manuscript is split into, roughly, three sections. The first is a foreword by Dr. Stephen Skinner, where he briefly introduces the make up of the MS and how The Voynich Manuscript came about. The manuscript itself has 5 identified sections: a herbal section, a cosmological section (my favourite), a section showing women bathing (it's not quite as weird as it sounds actually), a pharmaceutical section, and a textual section.

This is followed by an introduction by Dr. Rafal T. Prinke and Dr. René Zandbergen, who dig more deeply into the Manuscript and its history itself, such as its unique alphabet, its different sections and its provenance. Since this is in my field of interest, I was fascinated to read about the history they attempt to establish for the manuscript, as well as the different studies and claims that have been made about the MS. Often with MSS like these, it is almost more important what definitely isn't true than what is. So that Leonardo da Vinci is not the author is a key finding, in a way. So in the case of The Voynich Manuscript, reading the Foreword and Introduction are a must. Not only are they interesting, they are also important to understanding and appreciating what you're about to see.

The Foreword and Introduction are followed by the reproduction of the MS itself. I absolutely loved poring over these pages. Although the illustrations are, by medieval standards, relatively simply and even amateurish, they are still stunning and fascinating. I especially loved the cosmological section (see the image to the right below) with its star rosettas and much more. The section on women bathing was also really interesting and I would love to tell you what conclusion Skinner, Prinke and Zandbergen drew from this, but for that you should truly read The Voynich Manuscript yourself. Of course I also tried my hand at figuring out any of the writing but failed miserably at even the smallest "word". Not that I will give up, I will be pouring over The Voynich Manuscript for a very long time. 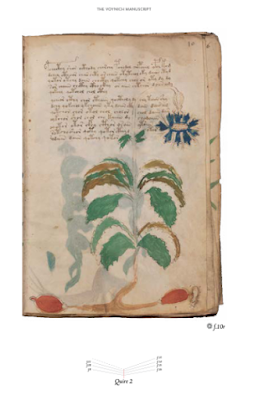 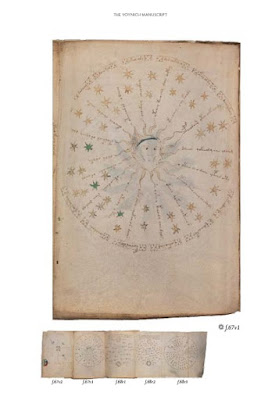 The Voynich Manuscript is an 'in between'-kind of book. On the one hand it is clearly academic in nature, a reproduction of an obscure medieval manuscript. On the other hand, Skinner, Prinke and Zandbergen seem to have done their best to make it accessible to every kind of audience. I have read student textbooks more obstinately confusing than The Voynich Book, whose Foreword and Introduction do its best to set up a novice reader with some of the knowledge and background they will need to truly enjoy the MS that follows. Their writing is clear and precise, to the point and not filled with academic jargon. This means that it is not just a special interest book, but is open to the wider public that may have an interest in history or manuscripts. Since Watkins Publishing was kind enough to send me a physical copy of the book I simply have to talk about the layout of the book for a second. The reproduction of the folios are very clear and you can really see detail on the page. Also, at the bottom of each page they show the reader where in the manuscript they are. A folio is one page of parchment, which is then marked either as r for recto (the front) or v for verso (the reverse). As the book reproduces the MS page by page, the different leaves are referred to as f1r, f1v, f2r, f2r, etc. They also show which quire you're on. A quire is four sheets, or bifolios, folded together which makes for 8 pages. The Voynich Manuscript treats its source material with care and clearly put a lot of effort into letting the reader get as close to the manuscript as possible.

If you want to know more about the manuscript, visit a comprehensive website set up by Dr. Zandbergen.

I absolutely adore The Voynich Manuscript. It is a beautifully rendered reproduction of one of the most continuously puzzling manuscripts to have come out of Eastern Europe. Skinner, Prinke and Zandbergen treat the manuscript with respect and guide the novice reader into the MS's secrets as well as they can. I'd recommend this to anyone interested in manuscripts and medieval history.
Labels: Academic Dr. Rafal T. Prinke Dr. René Zandbergen Dr. Stephen Skinner Manuscripts Medieval Medieval History Medieval Manuscripts Non-Fiction Review The Voynich Manuscript Watkins Publishing