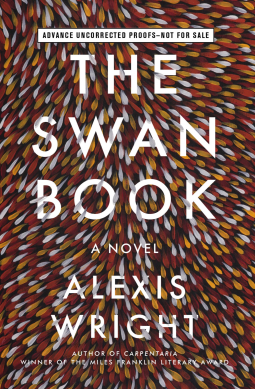 It's Friday and it's pouring rain here in Shanghai like you wouldn't believe! I'm quite grateful for it since it's been incredibly hot here and this will hopefully cool it down a little bit. Also, this is my last week on sick leave! My eye is pretty much healed and the cornea only a little bit scarred so this time next week I'll be teaching English once again. I'm quite glad to get to do something productive again although I've also enjoyed the last few weeks of intense reading. But let's get on to the Friday fun! Book Beginnings and Friday 56 are hosted by Gilion over at Rose City Reader and Freda from Freda's Voice. Hop over their to join in on the blogging fun!


For this week's Friday Friyay I've chosen a book I just started, The Swan Book by Alexis Wright!


Oblivia Ethelyne was given her name by an old woman who found her deep in the bowels of a gum tree, tattered and fragile, the victim of a brutal assault by wayward local youths. These are the years leading up to Australia’s third centenary, and the woman who finds her, Bella Donna of the Champions, is a refugee from climate change wars that devastated her country in the northern hemisphere. Bella Donna takes Oblivia to live with her on an old warship in a polluted dry swamp and there she fills Oblivia’s head with story upon story of swans. Fenced off from the rest of Australia by the Army, its traditional custodians left destitute, the swamp has become “the world’s most unknown detention camp” for Indigenous Australians. When Warren Finch, the first Aboriginal president of Australia invades the swamp with his charismatic persona and the promise of salvation, Oblivia agrees to marry him, becoming First Lady, a role that has her confined to a tower in a flooded and lawless southern city.

Let's get to the quotes!


'Upstairs i my brain, there lives this kind of cut snake virus in its doll's house. Little stars shining over the moonscape garden twinkle endlessly in a crisp sky. The crazy virus just sits there on the couch and keeps a good old qui vivre out the window for intruders. it ignores all of the eviction notices stacked on the door. The virus thinks it is the only pure full-blood virus left in the land. Everything else is just half-caste. Worth nothing! Not even a property owner. Hell yes! it thinks, worse than the swarms of rednecks hanging around the neighborhood. Hard to believe a brain could get sucked into vomiting bad history over the beautiful sunburned plains.' 1%

I really liked this beginning although it also confused me. I'm not sure I'm entirely following the metaphor yet, although I get the idea of a virus in your head poisoning how you see the world. However, I already love Wright's writing. It's very lyrical and descriptive.


His artfulness in disappearing and reappearing was so strange, that as the swamp people had believed he was somewhere else, he could still make you feel that you had never seen him - that he was never there at all. This is why they were out on the genies' country.' 56%

I haven't gotten this far in the book yet, so it was quite difficult to find a quote without spoiling myself or you. This one is very good at intriguing me though. Who are we talking about, how does he keep 'disappearing and reappearing' and what is 'the genies' country'?


Also, I want to share some adorableness with you! I'm using the last week of my sick leave to foster two absolutely tiny kittens and they are simply too cute so here is an Instagram I took a few days ago!

I've named them Luke and Leia because I'm an unmitigated nerd.

So, what do you think of The Swan Book? And aren't the kittens adorable?
Labels: Alexis Wright Atria Books Book Beginnings Dystopia Fiction Friday 56 Friday Friyay The Swan Book