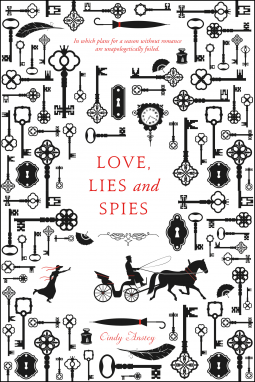 My love for anything Jane Austen should be a major clue to everyone that if you give me a funny heroine, a charming hero and ballgowns galore that I will be a very happy reader. So of course I couldn't let Cindy Anstey's Love, Lies and Spies pass me by! And this one is coming out today, which means you should go get it! Thanks to Macmillan, Swoon Reads and Netgalley for providing me with a copy of this book in exchange for an honest review.

In Love, Lies and Spies, Cindy Anstey's hilarious homage to Jane Austen, a lady with a penchant for trouble finds a handsome spy much more than merely tolerable.

Juliana Telford is not your average nineteenth-century young lady. She's much more interested in researching ladybugs than marriage, fashionable dresses, or dances. So when her father sends her to London for a season, she's determined not to form any attachments. Instead, she plans to secretly publish her research.

Spencer Northam is not the average young gentleman of leisure he appears. He is actually a spy for the War Office, and is more focused on acing his first mission than meeting eligible ladies. Fortunately, Juliana feels the same, and they agree to pretend to fall for each other. Spencer can finally focus, until he is tasked with observing Juliana's traveling companions . . . and Juliana herself.

First let's talk about Love, Lies and Spies as an independent novel. All one can really say is that it is utterly charming. From the first line Anstey's writing shows itself to be really entertaining and the definition of "quintessentially English". With Juliana hanging off a cliff and Spencer Northam appearing as a dashing rescuer, there is fun and excitement from page one. If I had to describe this novel through a metaphor it would be through the image of a calmly flowing river on a lovely summer day. The plot moves effortlessly on and on, and although hardly any of the twists and turns are real surprises they come exactly when you want them and so it's actually a pleasure when exactly that happens which you were hoping for.

As the blurb says, Love, Lies and Spies is an homage to Jane Austen and it is probably the best one I have read in a very long while. Because rather than create a weak carbon copy of one of Austen's plots, Anstey actually very cleverly infuses her own plot with loads of little hints to Austen's characters and plots. Juliana is reminiscent both of Elizabeth in her stubborness and reminds one a little bit of Emma in her devotion to her father. But then the plot is definitely a little bit more along the lines of Northanger Abbey, as is the chemistry between Juliana and Spencer. There is also the grumpy dowager and the secretly supportive father, which are practically staples for Jane Austen books. I'm also sure that upon a reread more similarities could be found, but this in itself should suffice to show exactly why Anstey' novel is such a beautiful homage. Love, Lies and Spies is perfect for those who want a fun romp through Austenland, giving us interesting characters and fun plot. I'll be the first to say that Anstey's novel doesn't necessarily go very deep or hits any truths very hard, but it also doesn't set out to.

As I said above, it is truly Anstey's writing which makes this story as fun as it is. Her dialogue is incredibly witty to the point where you know it's not entirely realistic but where it is the most fun. Juliana and Chester's chemistry sparkles of the page and by switching between their perspectives for each chapter the reader also gets to appreciate both of the characters to the fullest. What I really appreciated was Anstey's ability to never compromise her characters in order to allow for the romance-tropes. On the one hand Spencer gets to be the knight in shining armour, but Juliana isn't a lost damsel in distress. Juliana and the other female characters get to enjoy going to balls and receiving attention, but they don't immediately get typecast as airheads. Anstey's kindness to her characters is something that also reminded me of Austen and I can only give her props for it.

I raced through Love, Lies and Spies in a single night and didn't want to put it down. I found myself absolutely enjoying the novel and Anstey has definitely found a new fan in me. I'd recommend this to anyone who loves Jane Austen and Regency-style romances.
Labels: 4 Universes Cindy Anstey Female Authors Female Characters Jane Austen Love Lies and Spies netGalley Northanger Abbey Pan MacMillan Period Drama Regency period Review Romance Swoon Reads