Friday Memes and 'She' by H. Rider Haggard 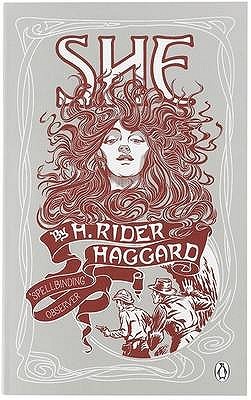 I've been wanting to read She for a good year at least now, I think. I found it at random in a recommendation list and it's been on my mind since then. And then, this Wednesday, I spent some time in the community library and suddenly ran into the cover on the left and realised which book it was. So of course I immediately took it out and wanted to share it with you.


On his twenty-fifth birthday, Leo Vincey opens the silver casket that his father has left to him. It contains a letter recounting the legend of a white sorceress who rules an African tribe and of his father's quest to find this remote race. To find out for himself if the story is true, Leo and his companions set sail for Zanzibar. There, he is brought face to face with Ayesha, She-who-must-be-obeyed: dictator, femme fatale, tyrant and beauty. She has been waiting for centuries for the true descendant of Kallikrates, her murdered lover, to arrive, and arrive he does - in an unexpected form.

Blending breathtaking adventure with a brooding sense of mystery and menace, "She" is a story of romance, exploration discovery and heroism that has lost none of its power to enthrall.

Doesn't it sound interesting? Book Beginning and Friday 56 are hosted by Gilion over at Rose City Reader and Freda at Freda's Voice respectively.

In giving to the world the record of what, looked at as an adventure only, is I suppose one of the most wonderful and mysterious experiences ever undergone by mortal men, I feel it incumbent on me to explain what my exact connection with it is. And so I may as well say at once that I am not the narrator but only the editor of this extraordinary history, and then go on to tell how it found its way into my hands.' p.1

I always like it when "travel"-books begin with introductions like these, with the authors pretending that the book we're about to read is a real, actual, historic document. It's authors trying to add some authenticity to their material so it is easier for the reader to "believe" their story.


'Circumstances have been against me in this respect, and men and women shrink from me, or, at least, I fancy they do, which comes to the same thing, thinking, perhaps, that my somewhat forbidding exterior is a key to my character.' p.56

Although I have no idea yet who is saying this, I like the way in which She is written. This feels like fun interior monologue with someone constantly going off on little sidetracks before returning to the main point.