Review: 'The Professor and the Siren' by Giuseppe Tomasi Di Lampedusa 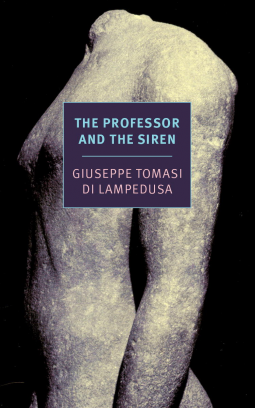 I am a sucker for short story anthologies lately and since it is my constant aim to broaden by literary horizons I was very pleased to see this anthology on Netgalley. Giuseppe Tomasi Di Lampedusa is an Italian writer and similarly to his novel Il Gattopardo (The Leopard), these short stories are all set in his native Sicily.


In the last two years of his life, the Sicilian aristocrat Giuseppe Tomasi di Lampedusa, in addition to his internationally celebrated novel, The Leopard, also composed three shorter pieces of fiction that confirm and expand our picture of his brilliant late-blooming talent.


'The Siren', with which the collection starts, is possibly my favourite out of the three stories. Taking up about half of the anthology, Lampedusa takes his time introducing his characters and their surroundings before revealing the meeting between the Professor and the Siren. The main character is, perhaps surprisingly, not the Professor but a young man of noble birth who finds himself coming down 'with a severe case of misanthropy'. What Lampedusa manages to do with this beginning is to also make an almost mythical figure out of the Professor La Ciura. Lampedusa seems to be aware of how humans tend to mystify those who we consider above us. This Professor is learned, well-off and accomplished and therefore he is something to be amazed at. By contrasting this human myth of the upper class with the myths of the Greek pantheon, Lampedusa shows the reader his own desire to have something to admire. He contrasts beautifully written prose with stark and sometimes disgusting images,

'Joy and the Law' is a potentially heart-breaking story. Whereas the cast of his other two stories are rich and belong to the upper classes, the main character of this second tale is one who knows poverty. Whereas in the first story Lampedusa seems to throw of social constraints of what is true and what is imagined, in 'Joy and the Law' he reminds the reader of how influential our imagined laws really are. The fact that things as respect and courtesy weigh heaviest on those who can't afford it is a tragedy which requires only very few words. Lampedusa manages to twist the reader's expectations quite a few times. The first line is 'When he climbed aboard the bus he annoyed everyone.' For a story about honour and obligation, it is made very clear that those rules only apply to a few of us. Everyone has gotten annoyed by people on the bus, but only a few of us remember whom we owe thanks and who we should really pay our respects to. It is clear that Lampedusa seems to be hearkening for a time in which these rules applied to all and where it didn't meant that those who were deprived of luxury were even worse off after charity was bestowed upon them.

'The Blind Kittens' is very much at contrast with 'Joy and the Law'. Whereas the latter centers around a poor family, the formed paints a picture of those up-and-coming and those still there. Lampedusa, himself a Sicilian Prince, wrote during the first half of the 20th century, which saw the decline of empires and royalty and the rise of the middle and working classes. In this story, he shows the 'tragic convulsions of a class' (p.90) that sees its own decline and yet is incapable of stopping it. He paints both those on the rise and those in decline as deeply unhappy yet set in their ways and I think it could be argued this story is, without being aware of it, very anti-capitalist. The constant hunger for more possessions, for more respect, for a higher status turns these characters into mewling kittens rather than lions.

Lampedusa's writing style is very vivid and his descriptions, especially of the Sicialian landscape, are absolutely beautiful. There is something to these three stories that makes them seem like folktales which are relayed from generation to generation. The collection is easy to read, but this doesn't mean it is easy to move on from one story to the next. Lampedusa has a talent for abrupt endings, which are ever so realistic, which means the reader finds themselves wondering how the stories would continue. I personally very much enjoy this because it means the stories stick with you and don't just seamlessly blend into the general whirl of stories we read and hear every day.

I truly enjoyed reading these stories and it's a shame Lampedusa didn't write more. Each story is independent and yet somehow there is a feeling they all interrelate. The rich and the poor live side by side in Lampedusa's Sicily and this allows his stories to be both realistic and mythical. This anthology has definitely encouraged me to seek out his novel The Leopard and I would recommend this to fans of magical realism.
Labels: 4 Universes Anthology Giuseppe Tomasi Di Lampedusa Review Short Stories The Professor and the Siren