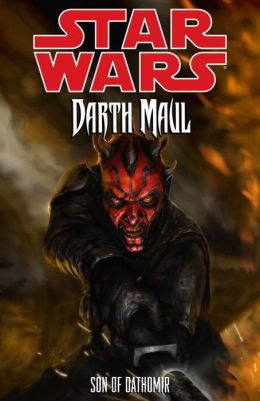 I was unsure of how to review this story, not only because this is going to be my first comic review but also because how do you review only part of a story when you have no idea how it ends? With book series, most of the books are often individual narratives that form a whole in themselves. In many ways Darth Maul: Son of Dathomir #1 is very much tasked with setting the stage for the story to come. Before launching into my review, credit is due where credit's due.

Some background information about this comic is probably useful, since the comic takes off pretty much where the Darth Maul arc left off in Star War: Clone Wars, namely defeated and captured by his old Master, Lord Sidious. This amazing cartoon series was cut short after only 5 season, the 6th appearing on Netflix, although it was recently revealed the plots for season 7 and 8 had practically been scripted. The resurrection of Maul, to the joy of countless, was a huge plot twist in the series and the idea of leaving the fans without a continuation of his arc was simply too much, which is why his story has been adapted into a comic book, the last Star Wars comic book, in fact, to be published by Dark Horse Comics. One of the main thoughts not only on my mind but probably on that of many who read it and reviewed it was that this story would have looked amazing on screen. The animation of Clone Wars became staggeringly good throughout the seasons and the fact this could have been on our screens is a sad one. However, Clone Wars director Dave Filoni said all their artwork had been turned over to Dark Horse Comics in order for them to make something as close as to what had been imagined and I have to say I absolutely loved the result.

The plot is introductory, in the best sense of the word. Not only are we re-introduced to Darth Maul and his current status as captive, but we also get to see the current Sith Lords all in the same room, may it only be for a page. As a fan I always wanted to see more of the dealings between the Sith, the interaction between Master and Apprentice, between former and current Apprentice etc. What Barlow's story beautifully shows is the back-stabbing, the jealousy and the ruthlessness with which these Sith operate. No wonder Maul turned out the way he did. The story doesn't linger too long though, progressing at a nice pace towards Maul's inevitable rescue by the Mandalorian Death Watch. Barlow does well in reminding the reader of the crime emporium that Maul built in the last season of the Clone Wars. I do hope there is some room for Maul to develop his character a bit more. As an avid Clone Wars watcher I know him quite well, but I can imagine that for newcomers, the plot very much appears as driven by Lord Sidious and Count Dooku.

I was very pleased with how much this comic felt like Star Wars. As a fan of both the Original and the Prequel Trilogy, I approached Clone Wars quite openly but I was less sure about the comics. However, the offbeat humour, the intensity of the battle scenes and the intricateness of the plot that, for me, characterised the Saga and the cartoon series are all present in this comic as well. Every moment I was expecting someone to say 'I have a bad feeling about this.' until I realised that, of course, only the "good guys" say that. A plot aspect I very much enjoyed is that of the importance of Mother Talzin. I don't want to give too much away, but I appreciated the fact that a woman forms a major threat and is one of the end goals. It shows that within the Star Wars Universe, female characters are very much on equal footing to male characters and that is always nice to see, especially in a time in which women are, unfortunately, still often reduced to eye-candy status in science fiction (yes, I'm looking at you Star Trek: Into Darkness).


I am very much a comic novice. This is the first one I've read since the Calvin & Hobbes ones my father owns. I would say I don't know much about the art conventions when it comes to how comics are drawn. I do know, however, that there are some spectacular frames in this comic. Especially those in which action rather than dialogue happens, are stunning. There is a surprising fluidity to the way one frame moves into the next. Maul and Grievous look as we're used to them looking and the former's facial expression, although generally set to angry, are very much in character. The only minus point, for me, was the way in which Count Dooku was drawn. He resembled neither the real life version of Christopher Lee nor the cartoon version of the Clone Wars very much, which means that his first appearance was interesting.

I've decided not to rate each separate issue by itself, but rather do a final review + rating when the final issue comes out and I can look at the arc as a whole. I can't wait for the next issue!
Labels: Chris Scalf Comic Darth Maul Jeremy Barlow Juan Frigeri Review Son of Dathomir Star Wars