Friday Friyay: 'Njals saga' from 'The Complete Sagas of Icelanders' 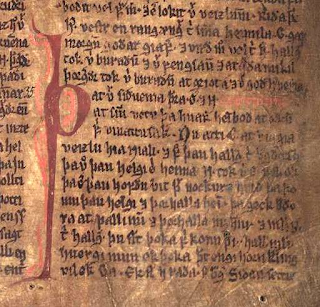 Happy Friday! I managed to do a little better with the posting this week, so yay! I'm finally diving into the primary material for my PhD and I've decided to subject you to these texts as well. Luckily they're really interesting texts, so hopefully you'll be intrigued by them! I've taken the below blurb from the Penguin edition, since The Complete Sagas of Icelanders is a 5-volume compilation and doesn't have blurbs proper, only spoiler-y mini-introductions! The image is from the manuscript, known as Möðruvallabók (or AM 132), and this is folio 13 recto. The r stands for recto, which roughly refers to the "right side of a leaf", in this case of a parchment sheet .

Written in the thirteenth century, Njal's Saga is a story that explores perennial human problems-from failed marriages to divided loyalties, from the law's inability to curb human passions to the terrible consequences when decent men and women are swept up in a tide of violence beyond their control. It is populated by memorable and complex characters like Gunnar of Hlidarendi, a powerful warrior with an aversion to killing, and the not-so-villainous Mord Valgardsson. Full of dreams, strange prophecies, violent power struggles, and fragile peace agreements, Njal's Saga tells the compelling story of a fifty-year blood feud that, despite its distance from us in time and place, is driven by passions familiar to us all.

'There was a man named Mord, whose nickname was Gigja. He was the son of Sighvat the Red, and he lived at Voll in the Rangarvellir district. He was a powerful chieftain and strong in pressing lawsuits. He was so learned in the law that no verdicts were considered valid unless he had helped shape them. He had a daughter named Unn. She was beautiful, well mannered, and gifted, and was thoughts to be the best match in the Rangarvellir.' p.1

This is a rather traditional saga-opening, in the sense that we get a little bit of geneaology, some geography, and the introduction of some key characters. Actually, Mord and Unn only really feature in the first 40-odd pages, but they are nonetheless interesting. Unn is one of the characters I'm very intrigued by, since she causes all kinds of trouble and that is exactly the kind of female character I'm looking for in my PhD!

'Njal came to Hlidarendi and called Gunnar out. Gunnar greeted them warmly.
Njal said, "Here is hay and food which I want to give you. I don't want you ever to turn to anyone but me when you're in need."
"Your gifts are good," said Gunnar, "but of greater worth to me is the friendship with you and your sons." p. 56-7

Ok, I cheated and went for a quote that overlapped onto the next page. But page 56 was all about how there was a lack of supplies and loads of difficulties and that all feels a bit dull until the end, when you realise this is an opportunity for Njall and Gunnarr to re-establish their friendship, to show their loyalty to each other. The relationship between the two is very important to the whole saga, because it is consistently tested by circumstances. (For circumstances, read 'the women in their lives'.)

This week's question was suggested by Billy himself:

Do you go back and reread the previous book before starting the sequel? 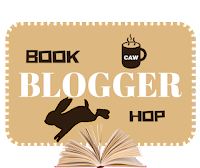 This really, really depends on the timeline. I'm a bit of an unreliable reader, in the sense that sometimes I will get the sequel before I have even started, or properly finished, the first book. So then I can seamlessly continue. But even if there has been some time in between, like the usual year/two years between books in a series, I'll remember enough to dig straight into the sequel. I recently started a sequel however that has just come out, while the first book came out like almost eight years ago. I did reread that one, to refresh, because it had been so long I mainly remembered my favourite scenes while forgetting the majority of the world-building etc. (Bummer with this one, the sequel is proving a bit rough...)

So that's it for me this week! What are you reading?