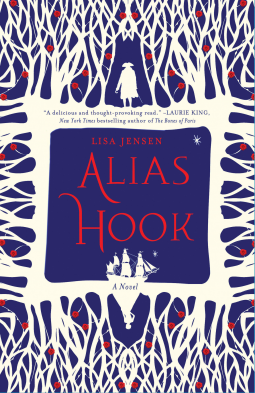 Happy Friday everyone! It's been a great and busy week with an assignment that involved some lovely in-detail research of a diplomatic charter from 1004, a colloquium by the Utrecht Centre of Medieval Studies, and the publication day for The Bridesmaid by Nina Manning yesterday! But now I'm ready for the weekend again and I found the perfect distraction while browsing through my Read shelf on Goodreads. I absolutely adored Alias Hook when I read it in 2014 and I think a re-read might be just the thing to get me in the weekend mood!

"Every child knows how the story ends. The wicked pirate captain is flung overboard, caught in the jaws of the monster crocodile who drags him down to a watery grave. But it was not yet my time to die. It's my fate to be trapped here forever, in a nightmare of childhood fancy, with that infernal, eternal boy."

Meet Captain James Benjamin Hook, a witty, educated Restoration-era privateer cursed to play villain to a pack of malicious little boys in a pointless war that never ends. But everything changes when Stella Parrish, a forbidden grown woman, dreams her way to the Neverland in defiance of Pan's rules. From the glamour of the Fairy Revels, to the secret ceremonies of the First Tribes, to the mysterious underwater temple beneath the Mermaid Lagoon, the magical forces of the Neverland open up for Stella as they never have for Hook. And in the pirate captain himself, she begins to see someone far more complex than the storybook villain.

With Stella's knowledge of folk and fairy tales, she might be Hook's last chance for redemption and release if they can break his curse before Pan and his warrior boys hunt her down and drag Hook back to their never-ending game. Alias Hook by Lisa Jensen is a beautifully and romantically written adult fairy tale.

Yes, the irony is not lost on me that I'm sharing a read with a pirate for the second week in a row! Book Beginnings is at home on Rose City Reader, hosted by Gilion Dumas, and Friday 56 at Freda's Voice, hosted by Freda. I'll also be joining the Book Blog Hop, hosted by Charlie over at Ramblings of a Coffee Addicted Writer.

'Second star to the right of what? The Big Dipper? Big Ben? Well, it's a fairy tale old girl, not a bloody road map.' 1%

Such a fun way to start a novel because yes... right of what? Of where, even? And why? Since it's been such a long time since I've read it this opening got me all over again. Revisiting books is like getting into a warm and comfy bed, making you wonder why you ever left.

'"The mermaids would have provided a haven for you."

"But a cold and watery one." She rubs her arms in a mock shiver. "I suppose I might be safer, but I'd miss the flowers and stars, and the music of a lovely night like this. I'd miss the sun."' 56%

I adore Stella, she is such a fun main character and every once in a while she comes out with beautiful phrases like this. Lisa Jensen did such a brilliant job with her! And with Hook! And with the whole Peter Pan story! 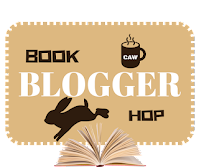 This week's question was submitted by Julie from Stepping Stones Book Reviews:

Who is your favourite character...of all the books you've read?

Oh my God, Julie is really coming through with the hard questions! Two weeks ago it was about the character you most identify with and now it's my favourite?!

I'm struggling with this one a bit, which I think was the point. My first thought was Elizabeth Bennet but then I think that is mainly because she's been with me for so long. Same with my second thought, which was Hermione Granger. So then I did some further thinking and some more thinking. And then I decided to cheat! I'm not going to pick one favourite character but rather describe what the characters I adore have in common. (Sorry Julie, I don't mean to be difficult!)

They are always headstrong, sometimes to their own detriment. They will go very far for their (found) family, even if they occasionally don't get along with them or have complicated relationships with them. They think big but don't forget about the small things that matter. Usually they're bookworms. They want to see the wider world and change things for the better. They will try, potentially until the bitter and final end.

So that's my favourite characters and Alias Hook is my weekend read!