Review: 'The Toll' by Cherie Priest 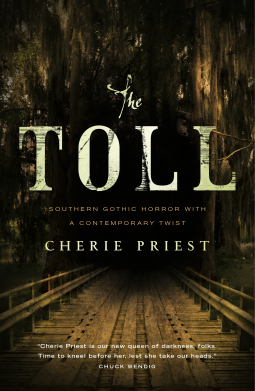 I was first intrigued by this novel's premise, the idea of a dark secret hidden in the swamp. Growing up in northern Europe, I am horrible unfamiliar with American swamps so they always sound mystical to me. They also sound like a place where I could absolutely not thrive. So of course I had to explore this Southern Gothic horror novel. Thanks to Tor Books and NetGalley for providing me with a copy of this book in exchange for an honest review.

From Cherie Priest, the author of The Family Plot and Maplecroft, comes The Toll, a tense, dark, and scary treat for modern fans of the traditionally strange and macabre.

Take a road trip into a Southern gothic horror novel.

Titus and Melanie Bell are on their honeymoon and have reservations in the Okefenokee Swamp cabins for a canoeing trip. But shortly before they reach their destination, the road narrows into a rickety bridge with old stone pilings, with room for only one car.

Much later, Titus wakes up lying in the middle of the road, no bridge in sight. Melanie is missing. When he calls the police, they tell him there is no such bridge on Route 177 . .

Most of my focus when it comes to studying or just reading literature has been on English literature, as in books written in the United Kingdom. As such, Southern Gothic is really unfamiliar to me. Doing some research into it, I discovered that many of the aspects I enjoyed about The Toll were elements of the Southern Gothic genre. The presence of horrific thoughts, grotesque characters and a deep sense of alienation, as well as, of course, a dark sense of humour. The genre looks at the dark tragedy behind the idyllic pastoral ideal, as well as the Freudian idea of the repressed. It is a very potent genre, one that has given us authors like Edgar Allan Poe, as well as Tennessee Williams.

The Toll starts with Cameron, observing his two god-mothers gardening. They're fascinating little women, and he is a very bored teenager. The plot of The Toll starts with Titus and Melanie Bell, fresh off their wedding, heading into the Okefenokee Swamp. Their bickering is just on the wrong side of constant, with some real angry undertones. They drive up to a suspicious bridge and before he knows it, Titus wakes up outside his car, having lost both time and his new wife. The rest of the novel takes place over the following few days as Titus encounters various inhabitants of Staywater in the search of his wife. The storylines of both Cameron and Titus are told alongside each other, but only entwine towards the ends. I would have loved to see more of the swamp, although the novel only truly moved there towards the end of the book. Overall, The Toll is an atmospheric tale that perhaps could have dug a little bit deeper.

I hadn't read anything by Cherie Priest before, although The Family Plot is on my list. The Toll is an interesting story but there is a lot going on with it. In general, the characterization is pretty on point. Cameron sounds like a seventeen year old boy, which means that at times he is very self-involved and annoying. His godmothers are lovely old women who are definitely hiding things. At times their sassiness is a little bit too much feeling more contrived than realistic, but I liked them anyway. Titus is a little harder to suss out as he is not really likable. At times the plot feels rushed, with not as much time spent on exploring motivations as just having them go through the steps. SOme really interesting ideas were underdeveloped, which was a shame. Sometimes The Toll really grabbed my attention and at other times I had to focus to stay interested. I wanted to like the novel more than I did, in the end, but there were some undeniably strong moments in this novel.

The Toll excels when it focuses on its folklore elements and lets the swamp do its work. The other elements of Priest's novel don't always work, but it does make for an interesting read. I'd recommend it to those wanting to dive into the Southern Gothic genre.
Posted by Juli Rahel at 7/28/2019 02:00:00 pm