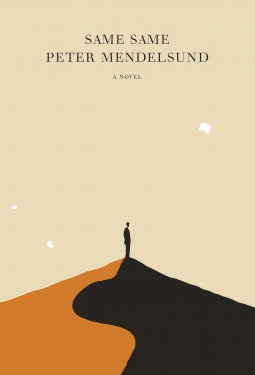 Some novels require work and dedication, whether you're writing them or reading them. Same Same was that kind of novel for me. What do you say about a novel that is as much about writing as it is about creating as it is about the meaningless of trying to do either? Below I have done my very best to gather my scattered thoughts on this novel. Thanks to Knopf Doubleday, Vintage and Netgalley for providing me with a copy of this book in exchange for an honest review.


In the shifting sands of the desert, near an unnamed metropolis, there is an institute where various fellows come to undertake projects of great significance. But when our sort-of hero, Percy Frobisher, arrives, surrounded by the simulated environment of the glass-enclosed dome of the Institute, his mind goes completely blank. When he spills something on his uniform—a major faux pas—he learns about a mysterious shop where you can take something, utter the command “same same,” and receive a replica even better than the original. Imagining a world in which simulacra have as much value as the real—so much so that any distinction between the two vanishes, and even language seeks to reproduce meaning through ever more degraded copies of itself—Peter Mendelsund has crafted a deeply unsettling novel about what it means to exist and to create . . . and a future that may not be far off.

I am going to have to be very honest in this review and admit that for much of Same Same found myself a bit confused. It took me a good few pages to get into Mendelsund's narrative, but once I did I was engrossed by it, despite still being a little lost. Same Same is a novel about creating, with its protagonist Percy Forbisher coming to a desert institute to do exactly that. He is there to create something, if only he knew quite what. Peter Mendelsund says Same Same was largely inspired by Thomas Mann's Magic Mountain, a novel I have not read. As such, I feel like part of the novel may have gone over my head. Same Same is a philosophical novel. It is also a minimalist, mystery and meta novel. Because of this, it is also a rather obscure and difficult novel. It is engaging but also disconcerting. There is a sense of claustrophobia and pointlessness to the novel that makes reading it almost off-putting. In that sense, Same Same is a masterful novel.

Percy is at the institute to create something. That much is clear. All he has, however, after many attempts, are his principles, the bare bones of what he think the work he might create be built around. However, his stay at the Institute has been ruined from day one due to a stain on his uniform. A different Institute member nudges him towards the Same Same shop, which replicates everything perfectly, whether it's a uniform or a device that may or may not be a phone. Percy becomes obsessed with this store, but at the Institute things slowly unravel as paper begins to pile up, creeping into all its corners and bringing the whole thing to a slow and painful halt. And then everything goes to hell and I'm not quite sure how. I still haven't quite figured out what the end is, exactly, or what it is trying to say. And perhaps that is the point. Because in the end Same Same is largely about the emptiness of creation. The industry is led by a Director who does nothing but threateningly shout inspirational slogans and empty words like 'synergy'. He'll remind you of influencers, spin instructors and Apple product releases. He's terrifying and  almost gave me nightmares.

Peter Mendelsund presents his readers with a challenge in Same Same. Reading through other reviews I have found many readers struggling with the novel in similar ways at myself. And yet I never once considered putting it aside. Mendelsund perfectly captures the oddities of humanity and the little inconsistencies in our world that make it so interesting. At one point he mentions how "the nicely cooled breezes blow in, jellyfishing the curtains" and I had to pause for a minute and accept just how brilliant that description was. Same Same is full of those kind of moments and they were largely what kept me engaged because they grounded the philosophy of the book in how mundane humans are. Same Same is challenging and at times it does feel like Mendelsund is a little bit too indulgent with himself. However, getting through it is rewarding and I can't say Same Same hasn't made me reconsider the way we think of art and creation.

Same Same is complicated and long and indulgent and weird. It is not an easy read, but it is a fascinating vivisection of creation and the artist. This is a book for those looking for a challenge.
Labels: 3 Universes Knopf Doubleday Magic Mountain Meta-narrative Peter Mendelsund Review Same Same Speculative Fiction Thomas Mann Vintage