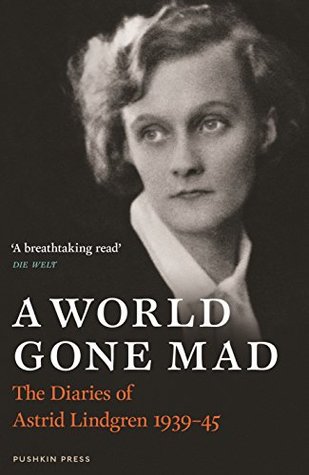 It's Friday and the sun is finally shining again in Shanghai! My sister came to visit me for 10 days and then my housemate moved out, so I have been a little bit preoccupied, but I'm ready to get back in the blogging groove now with some blog hopping fun. I haven't done a post like this in a while, which is really a shame because it's loads of fun.
Book Beginnings and Friday 56 are hosted by Gilion over at Rose City Reader and Freda over at Freda's Voice. Please do drop by their blogs to join in the fun!

Today I'm sharing a non-fiction read, one which I'm very excited about and can't wait to really get into. It's A World Gone Mad: The Diaries of Astrid Lindgren, 1393-45. I love Astrid Lindgren's writing, it was a major part of my childhood, so when I saw her diaries were being published, I knew I wanted to get this inside look into her mind.


As one of the world's most famous children's writers, Astrid Lindgren championed the qualities of courage, hope, love and resistance; and her preoccupation with these qualities was already in evidence in the diaries she kept during the Second World War, long before she achieved her fame. Her diary, published now for the first time in English, provides a fascinating insight into a Europe poisoned by fascism, racism and violence, from the point of view of not only an employee of the Swedish Mail Censorship Office, but also of a wife, mother and budding writer living in a formally neutral country.

In them, she asks questions which are as keenly and distressingly important today as they were in 1939-45: What is Good, what is Evil? What do we do, when jingoism and racism determine the thoughts and actions of humans? How can we, as individuals, take a stand against such malevolent forces?

Alongside the day's political events, Lindgren's intelligent and perceptive diaries include charming and moving descriptions of her domestic life, as well as of her first writing attempts: it was during this terrible period that she composed Pippi Longstocking, one of the most famous, enduring and widely translated children's books of the twentieth century

Oh! War broke out today. Nobody could believe it.

Yesterday afternoon, Elsa Gullander and I were in Vasa Park with the children running and playing around us and we sat there giving Hitler a nice, cosy telling off and agreed that there definitely was not going to be a war - and now today! The Germans bombarded several Polish cities early this morning and are gorging their way into Poland from all directions. I've managed to restrain myself from any hoarding until now, but today I laid in a little cocoa, a little tea, a small amount of soap and a few other things.' 1%

I love seeing contemporary accounts of major world events, such as the start of WWII. Lindgren managed to perfectly encapsulate how life was normal and how suddenly it changed. There are key details here, like how they initially felt comfortable enough to trashtalk Hitler, but are now hoarding food out of fear he'll come.

I suppose the most disquieting thing of all was that the damned Germans laid a minefield in Swedish waters. It was probably that minefield which decided the Ulven's fate. Because the other they they found the Ulven, for which they'd hunted so intently and desperately. And it was lying more or less in the middle fo that mine belt at a depth of 52 metres.' 56%


The fascinating thing about reading diaries and accounts of the past is that it often provides you with a completely different view of world history. I honestly don't know very much about Sweden's plight during WWII, so that is something I look forward to learning about during A World Gone Mad.

Do you enjoy reading diaries? I loved Sylvia Plath's diaries, they were lyrical and beautiful and she described the growth from girl to woman so well, I thought. Somehow it also feels a little bit like an intrusion, reading their inner thoughts, something they dedicated to paper in private. I think I feel that less while reading A World Gone Mad than with Plath, since Lindgren talks so much about world events.

What are you reading and sharing? Please do leave a link to your Friday post in the comments  so I can drop by!
Labels: A World Gone Mad Astrid Lindgren Book Beginnings Diaries Friday 56 Non Fiction Politics Pushkin Press Second World War The Diaries of Astrid Lindgren World War II