Review: 'Falling in Love with Hominids' by Nalo Hopkinson 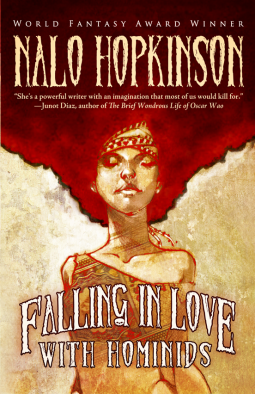 As frequent readers will now, I love myself a good short story collection. Short stories are an art form of their own and annoyingly difficult to get right, so when a collection comes along which strikes my fancy I tend to try and get my hands on it as quickly as possible. With Falling in Love with Hominids I was immediately intrigued by Hopkinson’s tone and topics and I’m certainly glad I got a change to read her stories. Thanks to Netgalley and Tachyon Publications for a copy of this book in exchange for an honest review.

Hailed by the Los Angeles Times as having “an imagination that most of us would kill for,” World Fantasy Award-winning author Nalo Hopkinson (Brown Girl in the Ring) is a critically-acclaimed storyteller. Her distinctive Afro-Carribean, Canadian, and American influences are revealed in stories that are filled with striking imagery, beauty, and strangeness.

Falling in Love with Hominids presents over a dozen years of Hopkinson’s new, uncollected fiction, including one original piece. Whether she is retelling The Tempest as a Caribbean myth, filling a shopping mall with unfulfilled ghosts, or releasing chickens that unpredictably breathe fire, Hopkinson is an author of myriad gifts and much to offer.

Falling in Love with Hominids is truly a magical collection of short stories which brings the reader completely different and new worlds to explore. What I found delightful about Falling in Love with Hominids as a whole was the way in which Hopkinson works with Fantasy and Science Fiction. She discusses it in her Introduction as well, that Science Fiction and Fantasy are exactly the types of genres which can be used to explore the everyday through the extraordinary or out of the ordinary. Quite often Sci-Fi authors are surprisingly lazy in how adventurous they try to be, not just with their stories but with their writing styles as well. Personally I a, a fan of authors who take a risk, who demand something of their reader as well. Whether it is having different narrators, switching between Creole and Standard English or unreliable narrators, each story in Falling in Love with Hominids is always refreshing. At the heart of Hopkinson's collection lie the hominids of her title, the Great Apes, the humans. Each story has a character at the core which Hopkinson explores with delicacy, which means that no matter how fantastical the story gets, it remains true.

Part of what makes Falling in Love with Hominids such an interesting collection is Hopkinson’s wide variety of protagonists. They’re male, female, young, old, orphaned, disabled, hetero-sexual, gay, etc. and each is written as well as the other. Switching between different voices and characters can be quite a challenge for authors but Hopkinson seems to nail all her characters perfectly, allowing the reader to empathise and identify with each one. Personally I found some of her stories focusing on young girls and women fascinating because her approach to fantasy and sci-fi allows Hopkinson a lot of room to describe humanity and its fault and virtues. On the other hand, some of her stories are also delightfully absurd, such as ‘Emily Breakfast’, which are a joy to read. Hopkinson's writing style doesn't really change between stories and yet each story feels different. They are infused with independent spirit and energy, while still being recognizable as Hopkinson's stories.


As a white, European woman I also really enjoyed the way in which Hopkinson brought in so much of her own background. Originally from Jamaica, Hopkinson doesn't shy back from having her characters speak Creole or to explicitly introduce black characters into stories where readers might not expect them due to strange genre expectations. It was incredibly refreshing and made every story interesting.  Most of the fiction market is saturated with white, young, skinny female heroines falling in love with white, young, masculine male heroes in the same way, over and over again. Falling in Love with Hominids has characters from all over the world and all stories are prefaced by a short paragraph detailing Hopkinson’s inspiration behind it, whether it was a chat on an online forum or the history of escaped slaves in Africa. In one of the stories where it worked best was Hopkinson's adaptation of Shakespeare's The Tempest which is perhaps my favourite ever take on a Shakespeare-story. Highlighting the post-colonial undertones in the

I absolutely loved Falling in Love with Hominids. Almost every single story was a hit with me and I have become a definite fan of Hopkinson's writing. Each story was original and held something that fascinated me. I'd recommend this to fans of Sci-Fi, Fantasy and Women's Fiction.
Labels: 5 universes Collection Falling in Love with Hominids Female Authors Jamaican Literature Nalo Hopkinson netGalley Post-colonial Literature Review Short Stories Tachyon Publications