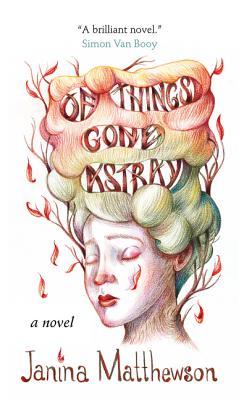 There is something charming about books which seem so abstract and ridiculous that they actually make genuine sense. Sometimes issues need to be pushed to the ridiculous as far as possible before they actually make sense. I had a feeling that Of Things Gone Astray was exactly that kind of book when I read the blurb and I'm very happy to say that I was right. Thanks to HarperCollins and Netgalley for providing me with a copy of this book in exchange of an honest review.


On a seemingly normal morning in London, a group of people all lose something dear to them, something dear but peculiar: the front of their house, their piano keys, their sense of direction, their place of work.

Meanwhile, Jake, a young boy whose father brings him to London following his mother’s sudden death, finds himself strangely attracted to other people’s lost things. But little does he realize that his most valuable possession, his relationship with his father, is slipping away from him.

Of Things Gone Astray is a magical fable about modern life and values and finding the things that really matter.

Of Things Gone Astray is a great insight into how humans can lose themselves sometimes. That might sound like an overly dramatic statement but Matthewson manages to pick up on small things that end up being symbolic for something much bigger. The storyline that got to me the most was that of Delia, who loses her sense of direction and never know where she's going or how she ended up there. And then, as you get to know her more throughout the book, you realize that maybe she has been lost for longer but that she's definitely heading towards something as well. It's with these kind of great links that Matthewson explores some of humanity's darker sides where we let ourselves get dragged down by everything around us.

Of Things Gone Astray is an incredibly fun book on the one hand and quite challenging on the other. All the chapters move between different characters and sometimes you have to think back to who exactly you're reading about. However, that somehow adds to the tone as well because it keeps you on your toes. Matthewson's writing is also fun and absurdly ridiculous at times. With some of the weird situations she puts her characters in there really would be no other way to talk about it without humour. I laughed out loud a couple of times, which made for occasionally awkward moments in public.

Matthewson won't make this book easy for you. All the stories are moving alongside each other, occasionally touching and interacting, but always moving where you're not expecting them to. They also won't necessarily end where or how you are hoping or expecting them to. The twists and turns, along with the absurdism of the book in general, are incredibly enjoyable, but the reader will have to put their trust in Matthewson to deliver a good story. There is also a beautiful sense of magic to it, in the sense of magical realism, where the things we see and do everyday take on a magical quality. It's one of my favourite genres and Of Things Gone Astray makes beautiful use of it!

I adored Of Things Gone Astray! Matthewson beautifully weaves together the stories of different people caught up in their life. Whether it's family, loneliness, death or love, everything gets discussed in this book and it will do so in ways you definitely won't expecy. I'd recommend this to fans of Magical Realism and slight Absurdism.
Labels: Absurdism Female Authors HarperCollins Janina Matthewson Magical Realism netGalley Of Things Gone Astray Review