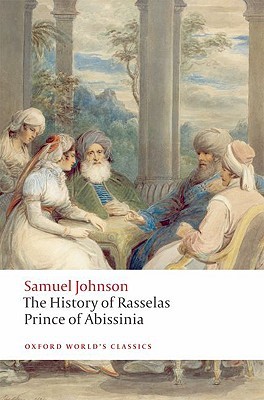 I haven't reviewed a university read in quite a while, even if those are the books that tend to make me think the most. The History of Rasselas, Prince of Abissinia

is a compulsory read for an 18th century lit-module and I am really glad to have read it.


Rasselas and his companions escape the pleasures of the "happy valley" in order to make their "choice of life." By witnessing the misfortunes and miseries of others they come to understand the nature of happiness, and value it more highly. Their travels and enquiries raise important practical and philosophical questions concerning many aspects of the human condition, including the business of a poet, the stability of reason, the immortality of the soul, and how to find contentment. Johnson's adaptation of the popular oriental tale displays his usual wit and perceptiveness; skeptical and probing, his tale nevertheless suggests that wisdom and self-knowledge need not be entirely beyond reach.

Rasselas can hardly qualify as a novel. There is no real sense of plot development or direction, the characters all feel like they're mouth-pieces for Johnson without any real differences between them and yet there is something fascinating about it. Johnson's apologue works on the basis that its main characters do not change their opinion. They doggedly chase after the answer to the question 'what choice of life' makes one happy?'. If they gave up on that search, Rasselas would end. As Rasselas, Nekayah, Imlac and Pekuah hop through the Middle-East and Egypt, the reader can't help but be sucked into their hope to find 'the choice of life'. What if suddenly they find the answer on the last page? It is a credit to Johnson's writing that you get so sucked into this tale and these characters, despite the fact that you know the answer to their question already.

Johnson was "inspired" to write Rasselas by his dislike for complacency. He felt, and I am tempted to agree with him, that people who grew too complacent with their lives became stagnant. Written and ublished during the late eighteenth-century, Johnson doubtlessly thought about the debates surrounding free will and the influence of God in daily life. Rasselas and his crew are forced to deal with many of these issues as well, especially the former. Originally, they lived in the Happy Valley in which each of their wishes is granted immediately and where each desire is fulfilled on the spot. Could you get closer to Paradise? As Johnson argues throughout Rasselas, never having to strife towards anything and not knowing any hardships leads to a static life in which nothing ever changes, for the good or the bad. I thought Johnson's exploration of life on the different levels was really interesting. Rasselas also had one of the best portrayals of mental illness which I've read in an eighteenth-century book. Any mockery of it is immediately corrected and Johnson deals with it with such care you can't help but be fond of him for it.

What I really enjoyed was the active role of women within the narrative. On the one hand, Nekayah and Pekuah are restricted to investigating marriage and being kidnapped, but Rasselas takes his sister's opinions seriously and discusses them in the same way as he would with anyone else. She also seems quicker to catch onto the fact that happiness can't be achieved completely and utterly with just one choice. Pekuah, her maid, goes on quite a journey herself and although, on the one hand, it seems a bit stereotypical, it also allows for her to become more aware of herself as a person.

Johnson's Rasselas is extremely interesting as a way to get yourself thinking about happiness and your own life. Are you expecting to find 'the choice of life' and holding out being happy because of it? Although his writing may at times feel a bit contrived, it is definitely interesting.
Labels: 4 Universes Apologue Classics Prince of Abyssinia Rasselas Review Samuel Johnson University