Review: 'Bones Buried in the Dirt' by David S. Atkinson 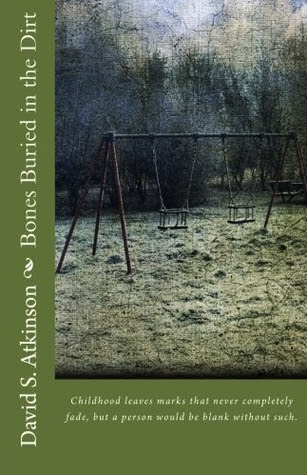 When this novel was offered to me for review I was immediately intrigued by the summary. 'Bones Buried in the Dirt' by David Atkinson sounded different to most childhood-related novels I have read before and I can say now, after having finished it, that it is a good thing!


The stories of this novel in story form act together to present the young life a boy named Peter. Ranging from Peter at ages four to twelve, the stories focus on the moments in childhood that get buried in the mind but are never fully absorbed. Unlike most coming of age tales, Peter is never brought forward into adulthood. Rather, though the stories are reflective, the distance is short. Thus, instead of a how an adult became who they are, the result is a becoming–a sonar picture of the person Peter will be.

This novel has an honest cruelty to it that I found very remarkable. Narratives about childhood often either idealize it or tear it to the ground, both to the effect that the reader ends up with an unrealistic image of childhood. 'Bones Buried in the Dirt' manages to walk the thin line between realism and fiction, where normal events are described in such a way they seem universally applicable to every child and yet intensely personal. The people and events in 'Bones Buried in the Dirt' are taken from real life and every person will recognize instances in the novel that make them think back to their own childhood. There is no misplaced sensibility, no covering up of how cruel children can be, and this allows Atkinson's novel to be an honest portrayal of a child growing up. Although I am a woman, I recognized many of Peter's experiences as my own and the question of what kind of a person Peter will be became a rather personal question.

The reader first meets Peter around the age of four and leaves him eight years later. Throughout that time, not only does Peter change, the novel changes as well. As Peter's friendships and relationships develop, the narrative turns from its specific focus on Peter's thoughts to more description and conversations.  As he grows up, things become less clear. Just like Peter, we aren't sure about his true feelings and thoughts, about how what has happened earlier has influenced him. Through Peter's eyes we also meet different characters such as Steven and Joy, who readers will instantly be able to identify as their own childhood friends. Their interaction seems so logical and normal, it is almost absurd how fascinating it still is. In a society where most of us are used to watching people's life unfold in reality shows on TV, it is amazing to see the same thing develop in a novel.

Whereas some may find the novel's take on childhood raw or challenging, I thoroughly enjoyed it. For the first time, I felt an author had dared to simply describe childhood as it is. Our memories are always in retrospect and always clouded by what we know and have become now. By withholding the grown-up Peter from us, Atkinson pulls this comfort away and we are forced to accept that childhood isn't the magical time we might remember, but that it also wasn't as dreadful as we might sometimes think. There were afternoons of boredom and moments of intensity that we were unable to explain at the moment. By not giving us an explanation for some of the occurrences in the novel, Atkinson brings us back to the time when a lot of things didn't make sense and yet others were so perfectly clear and obvious. You will encounter every emotion in this book, happiness, sadness, joy, as you rediscover your own childhood through Peter's story.

It is perhaps surprising that a novel that described something so average as a normal childhood can be both fascinating and funny, but 'Bones Buried in the Dirt' is a very true and thrilling read. I recommend this book with my whole heart to anyone who wants a stimulating, yet enjoyable read.