It is sort of difficult to review three separate short stories rather a collection of short stories, but I hope I have figured out a system. I'll review the stories and then I' 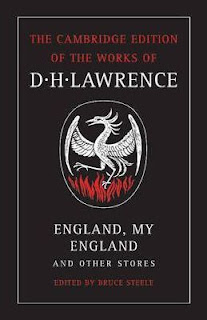 ll rate Lawrence on his ability to write short stories, in my honest opinion. The three stories I will review are ‘England, My England’, ‘Monkey Nuts’ and ‘The Horse-Dealer’s Daughter'.

England, My England
'England, My England' is set at the outbreak of war and deals with a family that is slowly breaking apart. The husband comes across as insensitive when in fact he seems to be completely separate of his human nature. He doesn't get back into touch with that until he finds himself a soldier and faced with death.

This was a bit of a strange story and at the same time it was very familiarly Lawrence. Most of his symbolism is drawn from nature and he is very good at it but in this story it was particularly interesting because he opposed this symbolism with the harsh reality of war and human nature. At times some scenes are quite shocking because they are so very harsh but I did enjoy reading them because they bring up a lot of interesting themes to think about.

Monkey Nuts
Both of these stories have to do with the First World War and whereas 'England' dealt with actual combat, 'Monkey Nuts' deals with the consequences of the War, especially for the relationship between men and women and how the roles of the latter have changed. On the one hand I did like the story because the female protagonist was so interesting and strong but on the other hand it was almost mean towards women. They had a much bigger role in society since all the men were of to fight the War and I feel that here we don't get the positive side effects of that at all. It is presented as emasculating rather than as supportive.

The Horse-Dealer's Daughter
This was my favourite story out of the 3 and I had some differences in opinion about it with my seminar people. The story centers on the daughter of the now dead horse-dealer. The household is packing up and she now feels she doesn't have a purpose and, in my opinion, is too independent to want to burden anyone else. I don't want to spoil the story but where everyone else seemed to think that she was either manipulative or weak I saw an independent woman who wanted to make her own decisions. I also saw much more of a love story than anyone else so that might have coloured my opinion as well! In this one story I thought Lawrence was an amazing narrator. Especially towards the end I just thought the story got better and better and I'm considering doing an analysis on it soon because it simply was very good writing.

Overall, I give these stories ...

I liked reading this stories but only the last one truly gripped me. I am not saying all characters have to be likable and it probably takes more skill to write a despicable character rather than a nice one, but the first two stories simply weren't to my taste. But Lawrence is a master at description and his use of language is beautiful, so even if you weren't convinced by my review of these stories I would still recommend picking up any of his novels because they are, truly, beautiful!
Labels: beautiful D.H. Lawrence England My England Monkey Nuts Review Short Stories The Horse-Dealer's Daughter women women's roles Writing WWI