It is that time of the week again! Book Blogger Hop is hosted by Crazy for Books and Follow Friday by Parajunkee and Alison Can Read.

What book that hasn't been turned into a movie (yet) would you most like to see make it to the big screen, and who would you like cast as your favorite character?

There are so many books I would love to see on screen. At the same time, a director's vision is never yours, so wishing for a movie is always a tricky thing. However, I would love to see the Otori-saga by Lian Hearn. Everyone who has ever taken a liking to Japan will love these books. Its characters are very well presented, the landscapes are described beautifully and the story is breathtaking. I would love to see this series be translated into 4 different movies, even though I am not sure you can put the entire story in only four movies! I will not even try to figure out a casting, because that would take me forever. I might try it this weekend though, because searching a face for a character tells you something about what you secretly think of the character too!
This weeks BBH question:
In honor of Banned Books Week, what is your favorite “banned or frequently challenged book”?”
Click here for 2010-11 list in PDF format. You can also clickHERE to view past years and choose from any of those titles!

I truly think this is my favourite question so far! However, why is Twilight on that list? It says there is explicit sexuality in those books, which is absolutely not true. It is one of the tamest books I have ever read! A favourite for most other bloggers seems to be 'The Hunger Games', but I still haven't read that one! Am I the only one in the world who hasn't?


I have been wanting to read 'Perks of a Wallflower' since over a year now, but still haven't. However, I have read Anne Frank's Diary and it was very interesting, but more from a shocked perspective. Her writing style was extraordinary, but then again, she lived in extraordinary times.


I have also read the Koran, or more correctly the Qur'an. This was actually a very enlightening experience. The Qur'an shares so many storied with the Bible. I would also like to tell those that think the Qur'an calls for a Jihad against all Christians that it does not, in fact, do that. It is a very peaceful book, even though it has its violent moments, just like the Bible.


And isn't it hilarious they put 'Catcher in the Rye' up on the list too? I have read the book twice now and I liked it more the second time. Although not one of my all0time favourites I still think it is a classic that is supposed to be read in school.


This is actually my first TGIF! This week's question is:
Banned Books: How do you feel about the censorship of the freedom to read? Do you think the education system needs to be more strict on what children are exposed to in books? 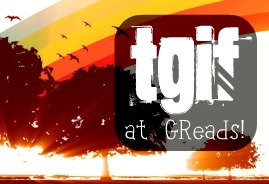 I think it is wrong to censor books in the way it is often done. Books express much more than just the story within. For example, 'Catcher int he Rye'. It is on the banned list for 2011, which I think is ridiculous. The story is not very offensive and the use of language is a lot tamer than in the average reality show on TV. Furthermore, it is a book that expresses the feeling of a time period. It is a book that teenagers all around can still identify themselves with because it catches this well-known feeling of being the only sane and independent person around. To ban a book like this, in my humble opinion, is to hinder the children's development.


Also, I think this is the wrong way of telling children what is good or bad. In 'Huckleberry Finn' for example, the word 'nigger' is used a lot. I think we can all agree on that being unacceptable nowadays. However, when Mark Twain wrote this book this is how they talked. Books are historical evidence for a change in attitude. Is not reading about this the best way to tell kids it is no longer acceptable? Although there are definitely age limits to certain books, you should never try to withhold a book completely from a child. I think that as long as there is a healthy discussion after wards everything should be fine.