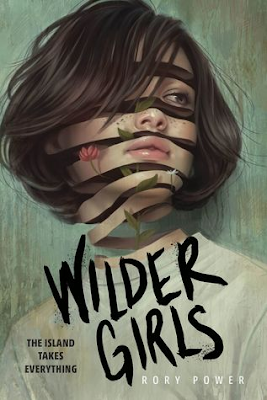 I first heard about the Wilder Girls in 2019 and was absolutely intrigued by it! Just look at that cover, how could I resits? And then I didn't get around to reading it. And now the idea of quarantine and lockdown and insecurity is scarily real. Wilder Girls took on a whole new meaning, while remaining a thrilling YA and horror read.

It's been eighteen months since the Raxter School for Girls was put under quarantine. Since the Tox hit and pulled Hetty's life out from under her.

It started slow. First the teachers died one by one. Then it began to infect the students, turning their bodies strange and foreign. Now, cut off from the rest of the world and left to fend for themselves on their island home, the girls don't dare wander outside the school's fence, where the Tox has made the woods wild and dangerous. They wait for the cure they were promised as the Tox seeps into everything.

But when Byatt goes missing, Hetty will do anything to find her, even if it means breaking quarantine and braving the horrors that lie beyond the fence. And when she does, Hetty learns that there's more to their story, to their life at Raxter, than she could have ever thought true.

Listening to Wilder Girls was an interesting experience. The mention of lockdowns, of not breaking quarantine, of a lack of food and weird social dynamics amongst those locked down together. It all feels much more real now than it would have if I had read this novel in 2019. Rory Power catches the weird dynamic between being scared of the outside and others, while also being fascinated by both. Mentions of the CDC, weird experiments gone wrong and isolation will hit readers differently depending on how their COVID-19 experience has been, but I found it an oddly touching experience. There is a great tension between the horror and the beauty of Raxter Island in Wilder Girls. Plants, animals, and girls have gone wild and dangerous, but there is strength and friendship there as well. These combinations were reminiscent of my own feelings over

Hetty, Byatt and Reese are quarantined on Baxter Island, their old boarding school now turned into an enclave embattled by the Tox, a virus that affects each girl differently. Hetty only has one healthy eye left, while Byatt has grown an extra spine and Reese has a silver claw. There are only two grown-ups left and a weird peace is maintained. But then Hetty is selected for boat duty and then Byatt goes missing and everything begins to crumble. Together with the stoic Reese, Hetty now has important choices to make. The novel is mostly focused on Hetty, with some chapters from Byatt's point of view. We get a deep insight into Hetty's fear and pain, as well as the pressure on her shoulders. On top of that she is exploring her feelings in regards to her friends, finding out if there is something deeper there. The girls are still very young and while sometimes they make adult choices, their feelings remain those of teenagers. The contrast was fascinating to read/listen to.

Rory Powers has written a great novel that straddles the lines between coming-of-age, horror, dystopia and YA. Wilder Girls is a complex novel because of these varying genres but it is centred by the narration of Hetty, a character I both deeply empathised with and occasionally found annoying in the way teenagers can be. She is in a constant battle for survival and therefore she often has to justify her own actions to herself. Some of these actions are, understandably, fraught with tension, the wrong choice being, oddly, the right one in the moment. Power inhabits Hetty's voice well and I found myself to be very fond of this trio of girls by the end of Wilder Girls. Narrators Eileen Stevens, for Hetty's chapters, and Jesse Vilinsky, for Byatt's chapters, did a brilliant job. Initially I had to get used to the American accent, since I spend so much time listening to British narrators do British classics, but both Stevens and Vilinsky do well at capturing the varying tones of the novel and the characters.

Wilder Girls is a beautiful novel of danger and hurt, but also full to the brim with love and friendship.