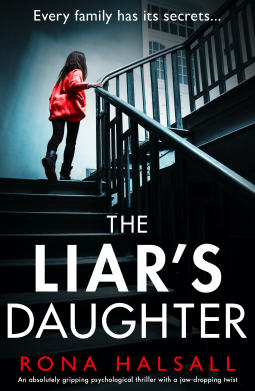 Eva has always wanted a sister, but now that she suddenly has one, it throws everything into doubt. Who has been lying? Or rather, who isn't lying? The Liar's Daughter will keep you on your toes, even if you can already see down which path you're being led. Thanks to Bookouture and NetGalley for providing me with a copy of this book in exchange for an honest review.

The call comes on an ordinary Sunday afternoon to say your sister has been admitted to hospital with a serious head injury. But you don’t have a sister… do you?

You’ve never doubted your parents. You’ve loved them without question your whole life. But your stepmother is uncharacteristically speechless, and your father isn’t well enough to understand.

So you get in your car.

Turn the key in the ignition.

Knowing everything behind you is a lie.

Not knowing what lies ahead: the truth… or something far darker?

A deliciously dark and twisty tale of deception, secrets and family ties, The Liar’s Daughter is perfect for fans of The Girl on the Train, The Woman in the Window and The Family Upstairs.

This book was previously named The Missing Sister and I will be honest and admit that I prefer that name, for content reasons. The relationship between the two sisters is central to the story, it's at its very heart. Having a younger sister myself, I know how much your life is shaped by your siblings, by your relationship with them. Their lives intertwine with your own and the central tension at the heart of The Liar's Daughter is how you forge that bond if you never knew the other existed. What are you willing to do for a sibling you don't really know? How do you create something spontaneously that takes years, if not decades, to build up slowly? This tension is beautiful and it is at the heart of a lot of suspense. In order to write it properly and to let it be fragile and strong and beautiful all at once, a lot of strong characterization is required. While that wasn't always present for me in The Liar's Daughter, this tension kept me engaged throughout.

Eva has put her life on halt to help her step-mother look after her increasingly ill father, whose dementia means he is living more and more in the past. But then a phone call comes in and it turns out she had a sister, one her parents thought was dead. So she sets out and looks after Nancy as she recovers from an accident. But was it an accident? And what other secrets will come out when she reconnects with her sister? Halsall moves at a fast pace, especially at the beginning of the novel, where we spend a lot of time inside Eva's mind as she deals with the revelation of her sister. Of course there are twists and turns, including two major twists that, if you frequently read suspense books and if you follow the hints Halsall spells out for you, aren't a major surprise. I still enjoyed them, but there was no major shock there. The main theme of The Liar's Daughter seems to be that people lie, that they betray the ones they claim to love, and that sometimes they lie to you because they love you. While this is an interesting set up for any suspense novel, I would have liked to see a little more flesh on those bones, even though there are some great details in this book. While all threads of the story come together neatly at the end of the book, I still felt like something was missing at the end.

I hadn't read any books by Rona Halsall before and The Liar's Daughter was an interesting introduction. The framework for a great story is right there and there were absolutely moments in which she utterly gripped me. Her descriptions of nature and certain, almost Gothic, aspects of the story at the beginning were great and kept me hooked. But in general I felt that, and I hate to be this person, there is a lot of telling, but not a lot of showing. Eva moves between anger at her parents, love for her parents, curiosity for her sister, and fear of further secrets at a speed that could give you whiplash. Throughout much of The Liar's Daughter I felt like I didn't know Eva herself enough yet to understand what all these revelations and happenings meant for her, which was a shame. The more twisty your plot gets, the more important it is that your main character can be a central focus point for your reader. And Eva wasn't entirely present for me. Nancy was interesting, in part because her life is wound up with the mystery at the heart of the novel. So there is a lot there and we get to see her change over the years. The characters around the two sisters are interesting at times but mainly function in order to further the plot and don't have much of an internal life aside from that.

While The Liar's Daughter was a fun read, it didn't resonate with me for very long. However, there is some great imagery here and fans of suspense will definitely be able to get something out of it.