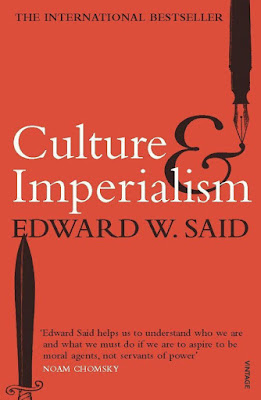 It's another Friday and since I for once don't have classes I can't wait to finally hop around and visit everyone's blogs again. I have been a little bit MIA but I was able to take part in the Blog Blast for the beautiful Painting Time yesterday, which was lovely! Today I'm sharing a non-fiction read with you all, which I have been wanting to read for a while but which now I think might also come in useful for one of my modules.

Following his profoundly influential study Orientalism, Edward Said now examines Western culture. From Jane Austen to Salman Rushdie, from Yeats to the media coverage of the Gulf War, Culture and Imperialism is a broad, fierce and wonderfully readable account of the roots of imperialism in European culture.

The cover on the left isn't actually the cover of my edition, but somehow I can't find it anywhere! Book Beginnings is at home on Rose City Reader, hosted by Gilion Dumas, and Friday 56 at Freda's Voice, hosted by Freda. I'll also be joining the Book Blog Hop, hosted by Charlie over at Ramblings of a Coffee Addicted Writer. 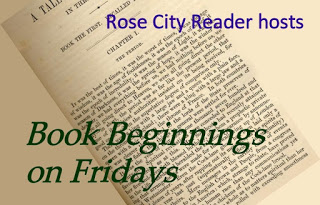 Appeals to the past are among the commonest of strategies in interpretations of the present. What animates such appeals is not only disagreement about what happened in the past and what the past was, but uncertainty about whether the past really is past, over and concluded, or whether it continues, albeit in different forms, perhaps. This problem animates all sorts of discussions - about influence, about blame and judgement, about present actualities and future priorities.' p.1

I am incredibly intrigued, academically and generally, in how we use the past, especially literary texts from the early Middle Ages. I can already tell that Said is going to be adding a lot to my knowledge and to my thoughts and concepts.

'The genuinely profound scholarship of the people who believed in and practiced Weltliteratur implied the extraordinary privilege of an observer located in the West who could actually survey the world's literary output with a kind of sovereign detachment.'  p.56

As an academic, who is a white, educated woman from Northern Europe, I think it is important for me to consistently stay aware of this! It also came up in a fascinating lecture recently, the idea that there is no such thing as objectivity or detachment when it comes to discussing pretty much anything. And especially if you're coming at an issue with a knowledge of history, you have to know you're not detached and that you're unconscious biases will be at play in anything you produce! 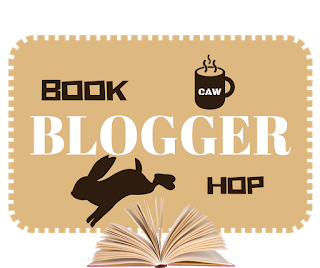 This week's question comes from Julie at JadeSky:

What book character do you think you are most like and why?

This is the dreaded question, the one I'm always thinking about with every book I read. My kneejerk reaction is to say Elizabeth Bennet from Pride & Prejudice because I adore her utterly, but I honestly don't think I'm as outgoing and free as she is. Occasionally, and I'm not always happy about this, I think I might be like Eleanor from Sense & Sensibility because I'm quite restrained emotionally at times, very loyal to my sister, and I have been known to have the occasional emotional and/or opinionated outburst. And although she isn't a character but was an actual person, I do think I have an occasional Emily Brontë streak where I just want to hide in the fens and glens of Northern England and never come back to society.

It always takes some time for a character to really settle with me, to become a shorthand, if that makes sense, hence why my choices above are rather traditional. I adore loads of characters I have read recently, but they haven't been with me long enough for me to discover parallels yet.