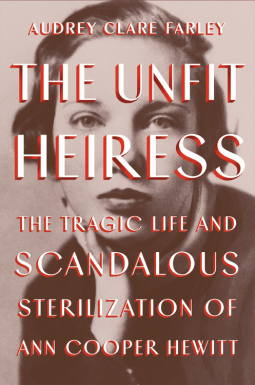 There are moments in your life where you hear something and simply can't believe it's true. For me, that is usually related to women's issues. Today's topic of 'Please No' is: forced sterilization. I know, hardly the happiest of topics and yet so important to read about, think about, and die mad about. Thanks to Grand Central Publishing and NetGalley for providing me with a copy of this book in exchange for an honest review.

For readers of The Immortal Life of Henrietta Lacks and The Phantom of Fifth Avenue, a page-turning drama of fortunes, eugenics and women's reproductive rights framed by the sordid court battle between Ann Cooper Hewitt and her socialite mother.At the turn of the twentieth century, American women began to reject Victorian propriety in favor of passion and livelihood outside the home. This alarmed authorities, who feared certain "over-sexed" women could destroy civilization if allowed to reproduce and pass on their defects. Set against this backdrop, The Unfit Heiress chronicles the fight for inheritance, both genetic and monetary, between Ann Cooper Hewitt and her mother Maryon.In 1934, aided by a California eugenics law, the socialite Maryon Cooper Hewitt had her "promiscuous" daughter declared feebleminded and sterilized without her knowledge. She did this to deprive Ann of millions of dollars from her father's estate, which contained a child-bearing stipulation. When a sensational court case ensued, the American public was captivated. So were eugenicists, who saw an opportunity to restrict reproductive rights in America for decades to come.This riveting story unfolds through the brilliant research of Audrey Clare Farley, who captures the interior lives of these women on the pages and poses questions that remain relevant today: What does it mean to be "unfit" for motherhood? In the battle for reproductive rights, can we forgive the women who side against us? And can we forgive our mothers if they are the ones who inflict the deepest wounds?

The Eugenics movement is at the root of a lot of the evil we've seen in the last and the current century. At its most basic, the Eugenics movement advocates for the improvement of the human race by eliminating "unwanted" hereditary traits. Although the argues mission behind this is to eliminate human suffering, it (almost) always turns out racist, ableist and sexist. Eugenics meant encouraging desirables to breed and "dissuade" undesirables from the same. The Eugenics movement in the US was a big inspiration for the Nazis in Germany and informed their attacks on Jewish people and the mentally handicapped. These attacks often took the form of forced sterilization and this is something we still see. We see this thought pattern appear in many things we might consider everyday. Looking into the history of the SATs, for example, shows how deeply rooted their creation was in Eugenic and racist thought. Farley does her best to cover these historic aspects in The Unfit Heiress, shining a light not just on Ann Cooper Hewitt's story, but also the story of the people who most often fall victim to forced sterilization: women of colour.

Ann Cooper Hewitt was a young heiress and her mother thought her promiscuous and had her declared feebleminded. When she went to the hospital for what she was told was appendicitis, she came out sterilized. Farley starts The Unfit Heiress with what comes next, Ann's press conference and the beginning of her lawsuit against her mother and the accompanying doctors who sterilized her. From here, Farley unravels the stories of Ann and her mother, Maryon, while also covering the lives and stories of the people around them. We get an insight into the way America's view of young women evolved. We get an idea of the mindset of the cultural elites. We come to understand, slowly but surely, the amount of crimes that have been committed agains women's bodies, especially the bodies of women of colour. As Farley details the later life of Ann, we come to understand she was a traumatized woman, but also a wealthy, white woman. From here, the narrative moves away from Ann which I understood. While Ann's story is important, it is also a gateway to other people's stories who have been kept quiet. For some readers this may fall flat, as the first half of the book is a great biographic effort. But for me, I felt that The Unfit Heiress really hit its stride once it began addressing the current struggles women still face when it comes to controlling their own bodies.

Audrey Clare Farley is a great writer. In The Unfit Heiress she combines biographic detail with detailed research, adding in touches of fictional story telling to elevate the emotions and themes she is working with. It is a brilliant combination and the fact that it works is really all due to Farley. I found myself very engaged with Ann and her story, moving between pity and abhorrence at what is happening to her. I was glad, however, as I mentioned above, that Farley threw her net wider and looked beyond just Ann. These last few chapters might not fit as cohesively to the rest of the narrative but they are crucial to contextualizing the issue and making readers realize this isn't something we left behind at the turn of the century. Many of these antiquated attitudes continue to exist and Eugenicist thought leaders remain behind many current movements, so it is important we keep being reminded about them. I will definitely be keeping an eye out for other books by Farley as I loved her writing style and her approach to this difficult topic.

The Unfit Heiress was a fascinating read, a book that gripped me almost from the very start. With comprehensive research, Farley presents not just Ann's story but also the story of many other women who were forcibly sterilized.