This was the first poem in Devotions that really got to me, in part because I had a copy of Marc's Blue Horses, made by my uncle, hanging in my room as a child. Below is the 1911 painting by Franz Marc (1880-1916), known originally as Die grossen blauen Pferde, or The Great Blue Horses,, which inspired Oliver's poem. As you may be able to guess from the year he died, Marc didn't make it through World War I, a sad fact addressed by Mary Oliver as well. I adore the strong colours, the sinuous shape of the horses, the way they are both separate and somehow seem to meld together. 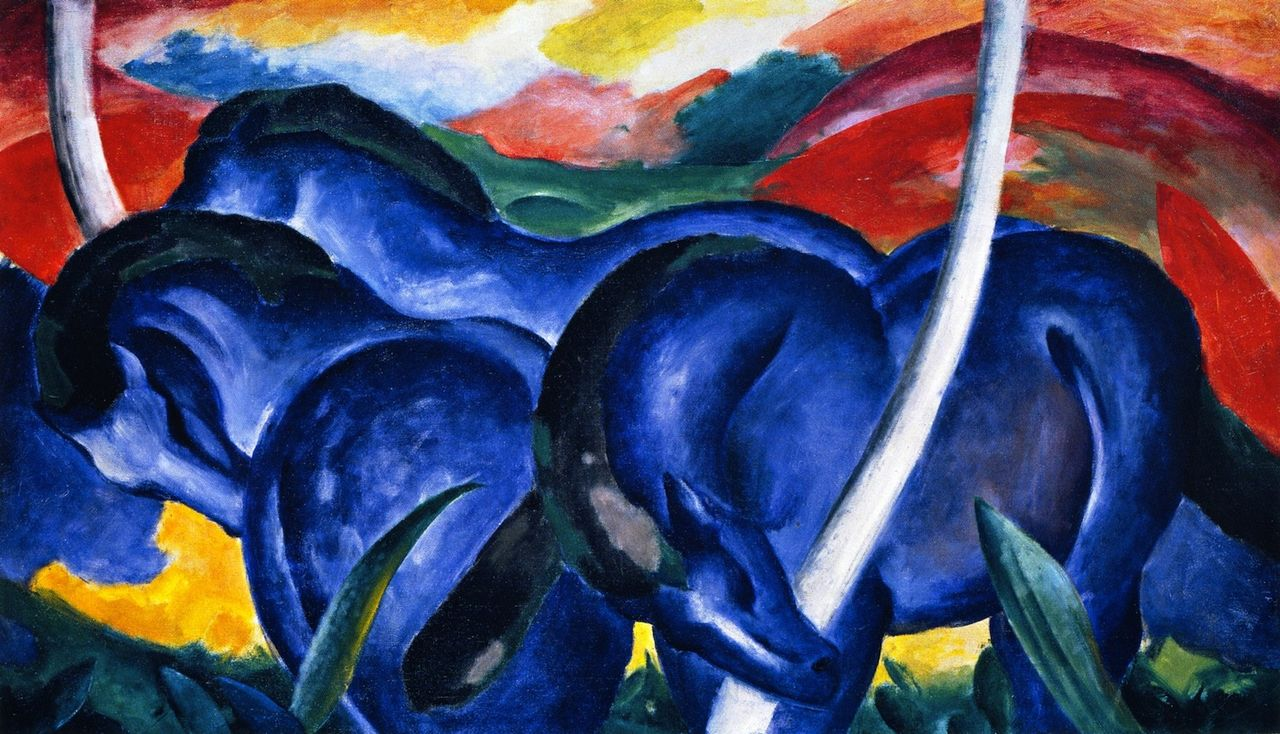 Marc created a whole series of paintings around blue horses, yet this one remains my favourite. Let's see what it did for Mary Oliver.

I step into the painting of the four blue horses.
I am not even surprised that I can do this.
One of the horses walks towards me.
His blue nose noses me lightly. I put my arm
over his blue mane, not holding on, just
commingling.
He allows me my pleasure.
Franz Marc died a young man, shrapnel in his brain.
I would rather die than try to explain to the blue horses
what war is.
They would either faint in horror, or simply
find it impossible to believe.
I do not know how to thanks you, Franz Marc.
Maybe our world will grow kinder eventually.
Maybe the desire to make something beautiful
is the piece of God that is inside each of us.
Now all four horses have come closer,
are bending their faces toward me
as if they have secrets to tell.
I don't expect them to speak, and they don't.
If being so beautiful isn't enough, what
could they possible say? p.21

I love how the first two lines are almost like a frame-narrative, a gateway into the poem where you have to accept that as the viewer you can step into a painting and engage with it, relate to it, learn from it. Without that belief, the rest of the poem feels less accessible. The horses are the ones to approach Oliver and I think it's key that she says she is 'commingling' with them. She becomes one with the horses, in a sense blends her awareness with theirs. The horses are not "straight-forward" horses, but rather almost like messengers, clearly grand and knowledgeable, but with a fondness and acceptance of our poet.

From there we go into Franz Marc's tragic end, come too soon. There is such an ineffable sadness to Oliver's unwillingness to share this news with the horses, as if they exist in a different realm where such tragedy could not occur, would be outlandish. It shows us Oliver's belief that nature itself isn't violent in the way that humans are. While death occurs there, nothing as 'impossible' as Marc's young death would be feasible. Yet despite his early death Marc clearly brought some joy to the world, some beauty, something for which Oliver is grateful.

Now for my favourite line in the poem:

'Maybe the desire to make something beautiful
is the piece of God that is inside each of us.'

This is stunning and I think a key theme in Oliver's poetry. She believes wholeheartedly in the good and the beautiful, in beauty for beauty's sake, despite the cruelty and the malice we are also capable of. And this comes from a little piece of the divine in us, of something outside ourselves that is good. Being Christian myself, I do like this idea, but I can also imagine that for non-religious readers that perhaps doesn't strike entirely true.

In our final "part" of the poem, Oliver is now surrounded by all four horses and while they can't speak their message, Oliver can perhaps intuit it. Their beauty, otherworldly as it is, is their whole purpose and that is enough. They are meant to give the viewer beauty, a moment of rest and perhaps a moment of connection. For those who want more, who want the horses to mean something more clear or more defined, Oliver asks what you could possible expect. In a world where young people die too soon with a bullet in the head, in which this occurs not just once but countless of times, what could there horses possibly do except be beautiful and themselves?

This poem can be found in Mary Oliver's Devotions (2017) and her 2015 collection Blue Horses.