Review: 'The Fate of the Tearling' by Erika Johansen 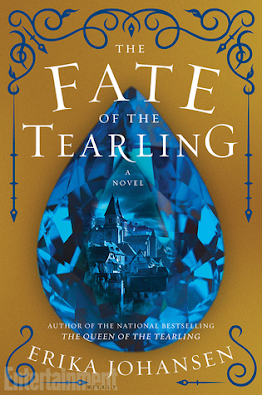 I was utterly obsessed with the Queen of the Tearling books when they first came out. I raced through the first one, The Queen of the Tearling and promptly followed it with The Invasion of the Tearling. And then, for some mysterious reason, I missed the drop on the third and final installment and never managed to find my way back. But thankfully, I found myself with a week's break during my first university term last year and sped-read my way through the trilogy once again. Early warning: this review will contain spoilers for the previous two books!

In less than a year, Kelsea Glynn has grown from an awkward teenager into a powerful monarch and a visionary leader.And as she has come into her own as the Queen of the Tearling, she has transformed her realm. But in her quest to end corruption and restore justice, she has made many enemies - chief among them the evil and feared Red Queen, who ordered the armies of Mortmesne to march against the Tear and crush them.To protect her people from such a devastating invasion, Kelsea did the unthinkable - naming the Mace, the trusted head of her personal guards, Regent in her place, she surrendered herself and her magical sapphires to her enemy. But the Mace will not rest until he and his men rescue their sovereign from her prison in Mortmesne.So, the endgame has begun and the fate of Queen Kelsea - and the Tearling itself - will be revealed...

The whole Queen of the Tearling trilogy takes place in less than a year, which honestly astounds me. I was very glad to have reread the first two books before I began The Fate of the Tearling so that I was once again attuned with all the personal relationships and happenings. What I also rediscovered was my love for Johansen's main character. Kelsea remains a slightly stubborn but deeply idealistic teenager with an enormous weight on her shoulders. The theme running through the whole trilogy is the hope for a better world, with the sad knowledge that this will require sacrifices on all sides. It is a profound theme for a trilogy I got into looking for escapism, but I continue to be deeply impressed at Johansen's commitment to this theme. It means that after reading Fate I was able to continue thinking on questions posed by the novel and its themes.

At the start of Fate, Kelsea Glynn has given herself up to the Red Queen to stop her army's march on the Glynn capital. Bereft of her blue jewels and therefore her magic, it seems like there is not much for Kelsea to do except wait to be rescued. Except that's of course not how Kelsea operates. Her verbal sparring with the Red Queen, whose identity was revealed in Invasion, is great to read and the combination between that and the Queen's Guard's attempt at rescue definitely ramps up the tension. In Invasion, Kelsea began experiencing visions of another woman's life, Lily, and this is continued in Fate, but with a twist. The introduction of time-travel brought a dystopian/sci-fi edge to this fantasy tale which I greatly enjoyed, and it continues to be fascinating. The main narrative push in Fate comes from a growing, paranormal threat against which victory feels impossible. As Kelsea travels across time, the situation for the Tearling becomes more dire and she finds herself, at last, up against the biggest choice of not just her life, but of everyone's. Also, head's up, there is one scene towards the end that is beautifully Gothic and edges into the horror genre. We stan a multi-genre novel!

Johansen continues to display a great talent for world-building. There were so many scenes and settings that I could picture in my head and as I was reading I kept forgetting that I was, in fact, reading and not inhabiting her world myself. Although there are gaps here and there when it comes to explaining some of the more mystic or magical aspects, this didn't stop me from being fully engaged with the story. I also continued to adore the cast of supporting characters as well. Father Tyler is a gem and, mixed with the trilogy's (justified, in my opinion, criticism on organized religion, he forms an example of how faith can be a force for good. And finally, about that ending! As we have seen with other famous trilogies, an ending is a hard thing to land and not everyone will be pleased with said landing. (I'm thinking of the Divergent trilogy here, although the ending did work for me, even if it made me cry.) The ending of Fate shook me. I hadn't expected it, even though I do feel like Johansen prepared us for it. Although perhaps too idealistic for the more realistic tone of her world-building, I still felt satisfied by it.

I adored the Queen of Tearling trilogy and therefore I had very high expectations of the ending. Perhaps that is why I delayed reading it so long, but Johansen sucked me right back into her world and I continue to be amazed at what she has created. This will continue to be a trilogy I will cherish and recommend into the high heavens.