Review: 'The Habsburgs' by Martyn Rady 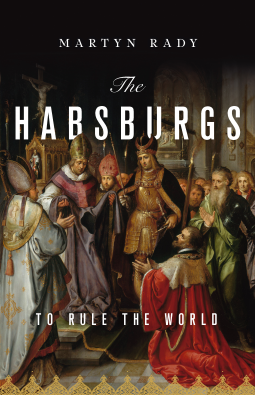 One of the things that continuously fascinates me about history is how so many things that must have been coincidence lead up to something that feels inevitable. For me, the Habsburgs have always been linked to World War I, which in and of itself felt both totally avoidable and inevitable. The Habsburgs by Martyn Rady gave me a chance to dig further into this family's history and realize once again how they pop up simply everywhere. Thanks to Perseus Books, Basic Books and NetGalley for providing me with a copy of this book in exchange for an honest review.

The definitive history of the dynasty that dominated Europe for centuries

In The Habsburgs, Martyn Rady tells the epic story of a dynasty and the world they built -- and then lost -- over nearly a millennium. From modest origins, the Habsburgs gained control of the Holy Roman Empire in the fifteenth century. Then, in just a few decades, their possessions rapidly expanded to take in a large part of Europe, stretching from Hungary to Spain, and parts of the New World and the Far East. The Habsburgs continued to dominate Central Europe through the First World War.

Historians often depict the Habsburgs as leaders of a ramshackle empire. But Rady reveals their enduring power, driven by the belief that they were destined to rule the world as defenders of the Roman Catholic Church, guarantors of peace, and patrons of learning. The Habsburgs is the definitive history of a remarkable dynasty that forever changed Europe and the world.

Aaah the Habsburgs, who started as nothing and eventually had a finger in every pot and were inbred up to their ears. What a family! In The Habsburgs Martyn Rady runs the reader through this family's entire history, showing how they seemed to fail upwards consistently, until they ran the Holy Roman Empire, and then truly took the reins. You will find Habsburgs in almost every major European and global event or trend from the fifteenth century onward: the Reformation, the expansion to the New World, Freemasonry, Alchemy, and pretty much every single war or battle. They gave us the Empress Sissi and Marie-Antoinette, but also the Habsburg Jaw and many an atrocity. The Habsburgs is an expansion of Rady's A Very Short Introduction on the same topic and it is definitely expansive.

The Habsburg empire was a fascinating amalgam of different countries, cultures, histories, languages, traditions and faiths. The fact it held as long as it did is almost miraculous, but I think part of the reason why it continues to fascinate is because we find ourselves in the situation where we need to try something similar. The world is so interconnected now that we need to face every problem if not as one, then at least united in an understanding of each other. The Habsburg empire is not an example but it is a lesson of history it is worth learning. I will not go into every single thing Rady covers in The Habsburgs otherwise I would have to re-type the book, but a big focus lies on their rise to power as well as their loss of that very power.

Martyn Rady doesn't set out to share any opinions or win any arguments in The Habsburgs which means that those expecting scandalous stories about  the inbreeding and madness of the family will be disappointed. But so will those be who were expecting him to come down harshly on the imperialistic tendencies of the family. In many ways The Habsburgs is a perfect introduction, a primer of sorts, that runs you through all the major characters and happenings with just the right balance between fact and interest to make you want to do further research yourself. For me this means that Rady strikes the right tone, since no one book can cover hundreds of years and events and crises and do everything justice. Rady will make you want to pick up further books to learn more, and I couldn't ask anything more from a history book.

Although I'm willing to accept The Habsburgs won't be for everyone, it is exactly the kind of book for those who are interested in history. Well written and full of information, The Habsburgs is both a fun reading experience and a valuable resource.