Poetry Review: 'The Gates of Never' by Deborah L. Davitt 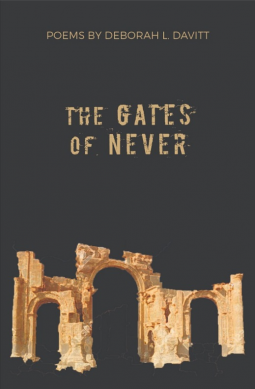 I don't read poetry often. I had to study it at university and it was my first true introduction to its potential beauty. Unlike many other bibliophiles and wannabe-writers, I have never written poetry myself because I always had a secret inkling that I would be horrible at it. So poetry became something I never explored independently. But now I've decided I should do something about that and I couldn't have chosen better than Davitt's The Gates of Never. Thanks to Finishing Line Press and NetGalley for providing me with a copy of this collection in exchange for an honest review.

“With the Gates of Never Deborah Davitt offers us a sumptuous exploration of the cosmic and the mythic, the historic and the familiar. Her lines hum with memory and imagination, forging a distinctive landscape of voice and omen, whether it’s taking on sea wolves or ancient empires, the mysteries of the human heart or a single leaf. This is a finely-tuned collection for those who dare to dream deeply in a vast cosmos.”–Bryan Thao Worra, NEA Fellow in Literature.

One of my favourite poems was 'The Sea-Wolf of Brittany', about a Breton warlord called the 'sea-wolf'. They attempt to tame him through marriage, but betrayed by two brides he abandons human form forever. I think it is a brilliant exmaple of how Davitt brings together history, mythology and, surprisingly, some suspense. The same can be said for poems like 'The Pyre', which is probably my actual favourite poem from The Gates of Never, 'Russalka', 'Jade Mask' and 'Dragon Teeth'.

Another example of how Davitt plays with different themes is 'Storms of the King' from 'The Gate of Stars'. As far as I can tell, it is about Jupiter. Davitt uses the science of the planet to tell a beautiful story in only two stanzas. NASA is full of beautiful nerds who love mythology as much as I do and Davitt has used this to her advantage to combine astronomy and mythology into poems that strike a perfect balance between the two.

As I said above, poetry doesn't often strike a nerve with me. In the case of The Gates of Never, Davitt brought together all my favourite things in order to ensnare me. Of course not every poem will equally strike a chord, but in general this poetry collection has really struck me. The poems aren't traditional, in that they follow a clear rhyme scheme. I don't know enough about poetry to say what it is that it is doing, but it works very well. The Gates of Never feels both ancient and modern, which is a great combination.

I loved The Gates of Never which surprised me very much. Each poem draws a beautiful image and Davitt has definitely found a new fan in me. Anyone with an interest in mythology and legend will adore The Gates of Never as much as I did.
Posted by Juli Rahel at 2/14/2020 03:10:00 am