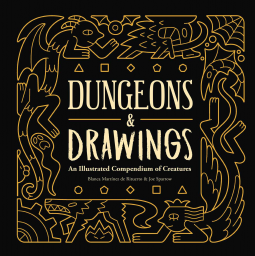 Dungeons & Dragons is having a major revival this decade, in large part thanks to Stranger Things and shows like Critical Role. I'm a not so secret Fantasy-lover, so D&D has always been on my radar even if I haven't actively played it in years. In their Dungeons & Drawings de Riuerri and Sparrow re-imagine creatures from folklore old and new. Thanks to Andrews McMeel Publishing and NetGalley for providing me with a copy of this book in exchange for an honest review.

Who hasn’t been fascinated by monsters? This book collects some of the best creatures from Dungeons & Dragons, setting them out in an informative illustrated bestiary for beginners and enthusiasts alike.

Whether they’re beasts, spirits, demons, or even aliens, most fantasy worlds are filled with monsters. Some are harmless—many more are deadly. Luckily for the discerning adventurer, this book is here to help distinguish between the two. As a popular series sold at conventions and on Etsy, animators Blanca Martinez de Riuerro and Joe Sparrow have compiled three volumes into one deluxe edition. Each creature comes with a full-color illustration, a set of simplified statistics, a description, and a history section indicating its folkloric history and the scientific phenomena that may have influenced its creation. With creatures like the Archdevil, Dryad, Fire Bat, Gold Dragon, Smoke Devil, Bomb Plant, Ettin, and Spirit Fox, any tabletop player will find the perfect creature for their next campaign.

MartÃ­nez de Rituerto and Sparrow started off posting drawings online after discovering they shared a passion for tabletop RPGs and Dungeons & Drawings is very much a best-of collection. Each creature, be it spirit, monster or alien, gets a brilliant drawing that draws (ha!) both on the folklore and legends around it as well as on more modern visuals. The drawings are very easy on the eye and somehow very recognizable, yet that belies how intricate they are as well. MartÃ­nez de Rituerto and Sparrow didn't go for the easy get with their drawings, often highlighting features of the creature that have been overlooked before. Dungeons & Drawings walks the line between nerdy excitement and artistic venture. It's as much about the art as about the creatures, which means that those looking for an in-depth bestiary or for a Dungeons & Dragons starter guide, will probably be disappointed.

Dungeons & Drawings covers the world, with creatures from Japan, Mexico, Ireland and everywhere in between. Each creature's illustration is prefaced by a short introduction that rates it, according to different, partly Dungeons & Drawings-related categories. How dangerous are they, are they smart or can you outwit them? The introductions give you an idea of how they might be defeated and what their powers are. It also digs into the the history of the creatures' names, the different regions from which it hails and the different forms in which it can be found. I loved those sections  the best, as a lot of creatures actually have a fascinating background story.

I give this compendium...

Dungeons & Drawings is a beautiful compendium of mythological creatures with modern but layered illustrations. It's perfect for those looking for a stunning book to lead through to gather some inspiration for their own RPG games.
Posted by Juli Rahel at 12/05/2019 12:35:00 pm