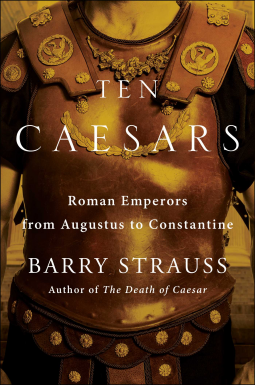 I adore history! Looking back into history reveals so much about humanity, whether it's our ingenuity, cruelty or our ability to love and change. Roman history is one of my favourites because it includes all of the above and more. Loyalty, betrayal, extravagance, torture, religious freedom, religious oppression, expansion, invasion. All of it is right there and all of it is also in Ten Caesars. Thanks to Simon & Schuster and NetGalley for providing me with a copy of this book in exchange for an honest review.

Bestselling classical historian Barry Strauss delivers “an exceptionally accessible history of the Roman Empire…much of Ten Caesars reads like a script for Game of Thrones” (The Wall Street Journal)—a summation of three and a half centuries of the Roman Empire as seen through the lives of ten of the most important emperors, from Augustus to Constantine.

In this essential and “enlightening” (The New York Times Book Review) work, Barry Strauss tells the story of the Roman Empire from rise to reinvention, from Augustus, who founded the empire, to Constantine, who made it Christian and moved the capital east to Constantinople.

During these centuries Rome gained in splendor and territory, then lost both. By the fourth century, the time of Constantine, the Roman Empire had changed so dramatically in geography, ethnicity, religion, and culture that it would have been virtually unrecognizable to Augustus. Rome’s legacy remains today in so many ways, from language, law, and architecture to the seat of the Roman Catholic Church. Strauss examines this enduring heritage through the lives of the men who shaped it: Augustus, Tiberius, Nero, Vespasian, Trajan, Hadrian, Marcus Aurelius, Septimius Severus, Diocletian and Constantine. Over the ages, they learned to maintain the family business—the government of an empire—by adapting when necessary and always persevering no matter the cost.

Ten Caesars is a “captivating narrative that breathes new life into a host of transformative figures” (Publishers Weekly). This “superb summation of four centuries of Roman history, a masterpiece of compression, confirms Barry Strauss as the foremost academic classicist writing for the general reader today” (The Wall Street Journal).

Ten Caesars discusses almost the whole of Roman imperial history, from Augustus to Constantine, which means Barry Strauss has to cover about 350 or so years in his book. He doesn't write about all the emperors that came between the two above, but has chosen the 10 "most important" ones. The book starts with a discussion of Julius Caesar, the origin of it all. From there we cover Augustus, Tiberius, Nero, Vespasian, Trajan, Hadrian, Marcus Aurelius, Septimius Severus, Diocletian and Constantine. Each of these made undeniable contributions to the Roman empire and its reputation. Hadrian's Wall still stretches across the UK. Istanbul is still a key city. Christianity is still a major religion. Rome is filled with triumphal arches celebrating battles and victories. So how do you cover all of that in around 400 pages?

Strauss' genius in Ten Caesars lies in covering both minute details that make the emperors seem more personable and also the grand scale consequences of their actions. None of the emperors get away entirely clean. Ten Caesars feels like sitting down for a fascinating conversation with someone incredibly knowledgeable and also funny. It doesn't feel like Strauss is talking down to his reader, which is very much appreciated from a history book. He never undercut the horror of the time period, the warfare, religious intolerance and murder, but he also celebrates some of the good things that occurred. One thing he actively tracks, for example, is how the Roman Empire slowly integrated the people it conquered into its ruling class, which I found fascinating. Strauss also payed attention the the people around the emperors, such as the mothers, wives, daughters, best friends and mentors who shaped the emperors and their policy. It added an extra layer of interest, for me, to Roman history.

Ten Caesars is  not a deeply academic book. It is a very good guide to the ten emperors who made, perhaps, the most difference to the Roman Empire. This is an introduction to the chronology of the Roman Empire for those who don't have a definite understanding of it yet. I myself am somewhat aware, which means I had heard most of the names before but couldn't connect each of them to the right century or achievement. Ten Caesars gave me that grasp and also gave me plenty of jumping of points to do further research into. I enjoyed Strauss' writing a lot and he found a good balance between sharing historical information and writing an interesting book. Although it took me a little longer to finish than expected that had more to do with my schedule than with Strauss. As I said above, for those already well-versed in Roman history, Ten Caesars may not be the best read, but for anyone with an initial interest, Strauss' book is great.

I adored Ten Caesars! This is the perfect book for those who want to know more about Roman history before digging straight into the hard academia. Strauss is a great teacher and I will definitely be looking for his other books on Roman history.
Posted by Juli Rahel at 12/09/2019 03:22:00 pm