Follow Friday and 'The Emperor's Waltz' by Philip Hensher

It is the Easter weekend! That means egg-hunts (although I've never done one of those), chocolate eggs and above all, it is now seasonal and therefore acceptable to watch 'Jesus Christ Superstar'! Best rock opera ever!


Follow Friday is hosted by Alison Can Read and Parajunkee! This week's question was submitted by Second Run Reviews:

Have you ever had a reoccuring dream? What was it?

I did for a while! I had this reoccuring dream where I would simply be sleeping or dozing and it was the most relaxed dream I have ever had. I'd be on a beach, casually chilling in a hammock, or be experiencing one of those amazing Saturday mornings where the sun is peaking through the windows and you're still dozing in bed, just enjoying the free time. I miss those dreams because it felt like I was getting double the sleep!

Book Blogger Hop is hosted by Billy over at Ramblings of a Coffee Addicted Writer! This week's question was suggested by Elizabeth over at Silver's Review:

Is there one book you will NEVER forget?

Oh God, there are so many books I will never forget, or at least that I currently think I will never forget. There are certain key moments in my life which I connect with books for which reason I will always remember them. One is Pride and Prejudice  by Jane Austen, which was definitely the starting point for my fascination with English Literature. Similarly, The Lord of The Rings

kick-started my interest in Old English for which I owe it my life-plan! Aside from that there is Wuthering Heights

. Those wee all crucial books to me and I just realized most of those were written by women... go me!

This week I'm sharing a book that I can't wait to get into. As soon as I have finished The Great Zoo of China

I am starting on this one! This book is The Emperor Waltz 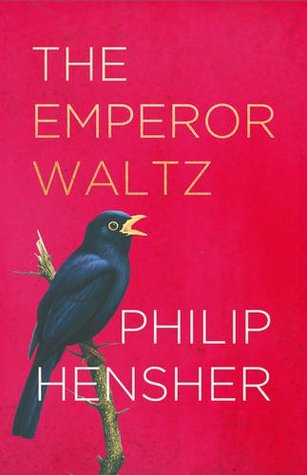 The new novel from Booker Prize-shortlisted Philip Hensher is his most ambitious and daring novel yet.

In a third-century desert settlement on the fringes of the Roman Empire, a new wife becomes fascinated by a cult that is persecuted by the Emperor Diocletian. In 1922, Christian, a young artist, travels to Weimar to begin his studies at the Bauhaus, where the avant-garde confronts conservative elements around it. With postwar Germany in turmoil, while the Bauhaus attempts to explore radical ways of thinking and living, Christian finds that love will change him for ever. And in 1970s London Duncan uses his inheritance to establish the country’s first gay bookshop in the face of opposition from the neighbours and victimisation by the police.

Delving deep into the human spirit to explore connections between love, sanctity, commitment and virtue, Philip Hensher takes as his subject small groups of men and women, tightly bound together, trying to change the world through the example of their lives. The Emperor Waltz is an absorbing echo-chamber of a novel, innovative and compelling, that explores what it means for us to belong to each other.

Doesn't it sound good? Book Beginnings and Friday 56 are hosted by Gilion over at Rose City Reader and Freda over at Freda's Voice.


'"You will have brought your own towels and bedlinen," Frau Scherbatsky said, in her lowered, attractive, half-humming voice, "as I instructed, as I suggester, Herr Vogt, in my telegram. Other things I can supply, should you not have them for the moment."' 1%

I really like this beginning. I want to kow who Frau Scherbatsky is, why Herr Vogt needs towels and bedlinen and who Herr Vogt even is! Also, telegram definitely suggests 1920ish as a time-period.


'In a society, isolation leads to eccentricity; eccentricity leads to loneliness; loneliness leads t madness. In the 1970s, a serial killer called Dennis Nilsen committed his first murder, he said, after not speaking to another human being for many days. That is one solution the soul comes to.' 56%

This book sounds absolutely fascinating! Isolation is definitely bad for a human's mind which is why it is considered torture if prisoners are isolated in prison!

So, this is my FF post for today! Do you have reoccuring dreams? And which books will you never ever forget?
Labels: Book Beginnings Book Blogger Hop Follow Friday Friday 56 Philip Hensher Pride and Prejudice The Emperor Waltz The Fountainhead The Great Zoo of China Wuthering Heights